Advertisement
The Newspaper for the Future of Miami
Connect with us:
Front Page » Profile » Brittnie Bassant: Leading economic growth drive at ChamberSOUTH 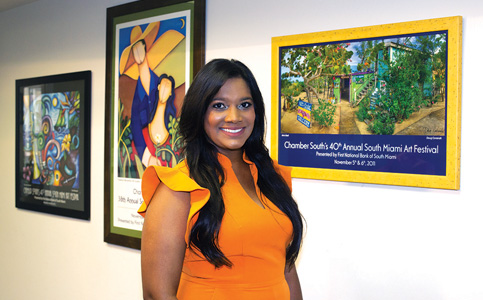 By the time she graduated from high school, Brittnie Bassant had developed a passion for nonprofit work that roughly a decade later led to her current role as president and executive director of ChamberSOUTH, the 500-member chamber of commerce for Greater South Dade.

She’d immigrated with her family to South Florida from Trinidad and Tobago when she was 14. So that she could better assimilate into American culture, her parents encouraged her to volunteer locally. She chose Miami MetroZoo, and within four years she’d amassed more than 1,000 com-munity service hours.

“That was my first dabble in nonprofit work and giving back, and I really enjoyed it,” she said. “Community service – giving back – is your role and responsibility as a citizen.”

The plan after college was to go to law school, but her love of nonprofit and public sector work steered her elsewhere. She worked for the Everglades Foundation for about a year and a half, then joined former county Commissioner Lynda Bell’s office as an outreach director.

Ms. Bassant later returned to nonprofit work as the operations manager of the Deering Estate Foundation, where she stayed until 2017, when ChamberSOUTH approached her to chart its future course.

“It gave me an opportunity to combine all those different fields I love – the nonprofit, community and business aspects, as well as government work,” she said. “I can really focus on giving back, making a difference and impacting change, which is what everyone wants to do at some point in their life.”

As the leader of the chamber of commerce for South Miami, Pinecrest, Palmetto Bay, Cutler Bay and Kendall, Ms. Bassant is positioned to help the business landscapes of those areas develop in the coming years. It’s an exciting responsibility and opportunity, she said.

“South Dade is growing at an exponential rate, with all the different municipalities looking at expanding their downtowns and being really focused on community and residential areas. Now they’re moving into being more cognizant of the business needs of the community,” she said. “I see a huge surge in focusing on urban development projects, and elected officials taking more of an active role in attracting more businesses to the community, so we’re in a really great place now with the leadership that’s in place to begin to impact change and make a difference.”