Advertisement
The Newspaper for the Future of Miami
Connect with us:
Front Page » Top Stories » Miami’s electric scooter rentals balloon from 300 to more than 3,000

Miami’s electric scooter rentals balloon from 300 to more than 3,000 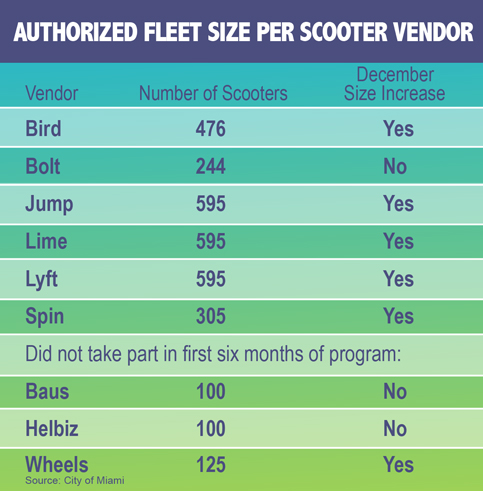 The City of Miami’s electric scooter rental experiment kicked off last April with six companies and fleets of 50 scooters apiece. Since then, three more companies have joined the pilot program, and total approved scooters in the city ballooned 10 times over, to more than 3,000.

Now, with a request for proposals potentially reaching the city commission next month, the program could either be made permanent or shut down altogether.

The scooter pilot is currently restricted to Commissioner Ken Russell’s district, which includes Coconut Grove, Brickell, Downtown Miami, Edgewater and Morningside. The commissioner has had to contest the value of the pilot, arguing that it has helped keep people out of cars and served as a solution for the last mile link to mass transit.

“I don’t think people really comprehend how valuable it is in terms of changing habits of how people get around,” he told Miami Today on Tuesday.

But he has met stern opposition from Commissioners Manolo Reyes and Joe Carollo, as well as complaints from constituents, who have raised concerns over underage scooter use, unsafe drivers, and scooters cluttering city sidewalks or ending up in other commission districts where scooter use isn’t legal.

Mr. Russell told Miami Today the city will be rolling out 100 drop zones across his district for the scooters. The designated parking zones could help minimize scooter clutter, he said.

As the city crafts a request for proposals, Mr. Russell said the number of companies allowed to operate in the city is likely to decrease, suggesting it could be whittled down to three or four. The city, he said, would score the companies on metrics that include fleet size, ability to incentivize good behavior and the safest equipment.

An industry day for the scooter companies is slated for Jan. 17, Mr. Russell said, at which the city will advise the companies what it is officials want to see, as well as get input from the companies.

While Mr. Russell said the program has resulted in about 1.6 million rides and $1 million for the city, of which much gets invested in bicycle and pedestrian infrastructure in his district, he acknowledged that other commissioners and residents’ concerns regarding safety could doom the pilot.

He said the city will be rolling out a campaign through social media and bus shelter ads to educate the public on proper scooter usage, adding that the most important thing is addressing underage scooter use.

Six scooter vendor joined the pilot during the six initial months: Bird, Bolt, Jump by Uber, Lime, Lyft and Spin. The city allowed each vendor to have a 50-scooter fleet during the first two weeks, and then allowed them to increase to 100. The city grants the companies 25% fleet increases monthly if usage rates are at three or more rides per day per scooter.

According to December letters from the city to the companies provided by the city, three companies have been granted a fleet of 595 scooters, the largest size: Jump, Lime and Lyft.

If a scooter vendor doesn’t meet the three-ride average but manages two rides per scooter per day, the vendor can maintain its fleet size. A company that falls beneath that threshold can trim its fleet.

Baus, Helbiz and Wheels are new additions to the program. Wheels was the only one of the three to be granted a fleet size increase in December.

The city is paid $1 per scooter per day, in addition to the $50,000 application fee each company had to pay.

Uhriel Bedoya, general manager of Lime Florida, touted that his company has been able to increase its fleet size every month since the program began. He said Mr. Russell’s office has been direct with his team, letting Lime know what is expected of the company.

According to information provided by the Miami Parking Authority, which has been tasked with enforcing the parking aspects of the pilot program, more than 1,300 scooters had been impounded from the outset to December, when the numbers were provided. The authority impounds scooters that users leave outside of Mr. Russell’s district and charges the companies $25 per scooter.

“No good deed goes unpunished. The reason that we have the most scooters impounded is because we have the largest fleet,” Mr. Bedoya said.

He added that because a rider can cross over from one commission district to another by merely going to an adjacent street, it’s easy for scooters to end up in other districts. He said there’s a demand for the scooter pilot outside of Mr. Russell’s area.

14 Responses to Miami’s electric scooter rentals balloon from 300 to more than 3,000