Advertisement
The Newspaper for the Future of Miami
Connect with us:
Front Page » Transportation » CNG buses could roll on new I-75 route by April

CNG buses could roll on new I-75 route by April 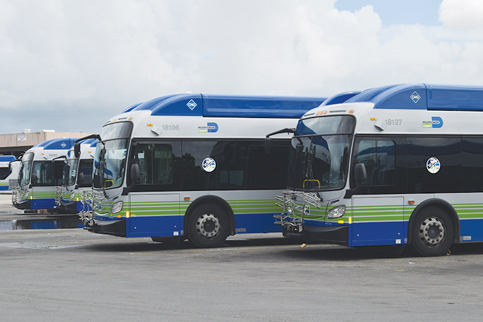 A new I-75 bus route between Miami Gardens and a Metrorail station in Medley could by April be served by seven new buses, and the Florida Department of Transportation would foot most of the bill.

Deputy Mayor Jennifer Moon said in a Dec. 3 memo that the county transportation department recommended that the $840,000 remainder be paid by the local half-penny surtax meant to expand transit countywide.

Once the county has a contract in-hand for the procurement, she said, it would be presented to the half-penny’s overseer, the Citizens’ Independent Transportation Trust, for review before the contract is submitted to county lawmakers for approval.

Ms. Moon said bus service between the Palmetto Metrorail station in Medley and Miami Gardens Park-And-Ride Lot, which opened after construction finished in April 2019, was expected to have begun in late September upon the state’s completion of new toll lanes on I-75.

“The proposed service will offer 10-minute headways during weekday peak hours,” she said.

“The delivery of the new buses is anticipated in April 2020,” she said.

To date, Miami-Dade has entered into contracts to buy compressed natural gas buses from two manufacturers: New Flyer of America and Gillig.

Ms. Moon did not specify whether the seven new buses would come from either manufacturer, and no manufacturer is listed as preferred provider in county and state documents included with her memo.

State funding for the purchase comes from Florida’s Transit Service Development Program, which the state Legislature enacted to provide startup dollars for special projects that improve or expand services to the riding public.

If a project is deemed successful after three years, it must be continued without using further Service Development Program funds.