Advertisement
The Newspaper for the Future of Miami
Connect with us:
Front Page » Profile » Admiral Craig Faller: Leading US military for 31-nation region from Doral 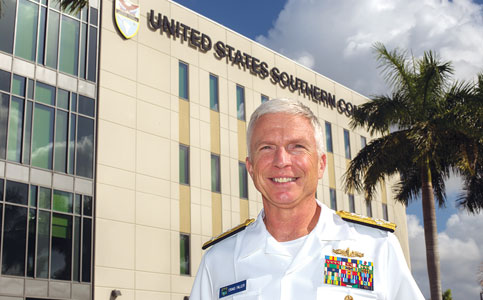 Adm. Craig Faller believes there are great opportunities for growth and cooperation between the United States and its many partners, present and potential, throughout Latin America and the Caribbean.

And as the head of United States Southern Command, the unified combat command responsible for the country’s military operations in the region, he plays a major role in advancing those efforts.

“It’s wonderful to look at this hemisphere as our neighborhood,” said the Gulf War veteran. “We share culture, values and appreciation for democracy. For military people, we talk about domains – air, land, sea and cyber. We share all that, too, and with that is an opportunity for economic prosperity and a better future for our civilians.”

Before taking over leadership of the command in its Doral headquarters on Nov. 26, 2018, Adm. Faller served for nearly two years as the senior military assistant to former Secretary of Defense James Mattis.

The role marked the latest step in a distinguished career that includes a multitude of leadership posts at sea and on land. As such, while he leads with optimism, it’s tempered with a keen understanding that there will be many trials ahead, and it’s his job to make sure his team is prepared.

“We’re dealing with 31 countries. Twenty-seven of them – and recent positive movement in Bolivia – are democracies. That’s a foundation to build on that’s very specific to this neighborhood,” he said. “Against that backdrop are challenges. See what’s going on in Venezuela, the scourge of narco-trafficking. There are these vicious threats that work in a circle that just want to strangle democracy and freedom. We are focused on them like a laser beam day in, day out.”

One Response to Admiral Craig Faller: Leading US military for 31-nation region from Doral