Advertisement
The Newspaper for the Future of Miami
Connect with us:
Front Page » Profile » Ivan Barrios: Expanding offerings of the World Trade Center Miami 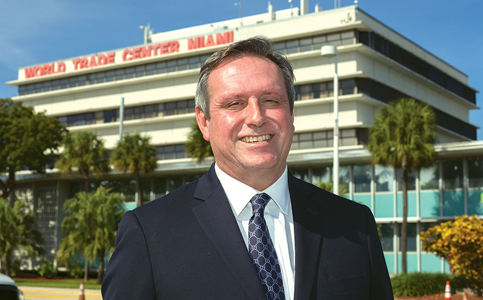 Ivan Barrios is days away from taking the helm of Miami’s oldest trade organization.

He’ll begin 2020 as the new president of the World Trade Center Miami, which has been led by Charlotte Gallogly for more than 30 years. A Miami native, Mr. Barrios is on his second stint at the organization, having returned in 2015.

Under his belt are also 15 years at Enterprise Florida, the principal economic development organization for the State of Florida. During his time at the public-private partnership, he worked under three governors, helping coordinate trips abroad that, among other things, promoted the Sunshine State’s brand as a trade hub.

Having worked in trade and economic development for 30 years, Mr. Barrios said that he’s seen how Miami’s business community has grown. And he’s enjoyed seeing Miami become a central trade hub in the hemisphere.

“I’ve always wanted to help people and help my community grow,” he said.

With several organizations helping to promote economic development and trade in the county, Mr. Barrios described the World Trade Center Miami’s work as “hands-on connecting people.” And as part of a network of more than 300 centers worldwide, the World Trade Center Miami can connect businesses across the globe ¬– a coveted service in a city as international as Miami.

Mr. Barrios sat down with reporter Gabriel Poblete. The interview, recorded by Jahmoukie Dayle, can be viewed below.

One Response to Ivan Barrios: Expanding offerings of the World Trade Center Miami