Advertisement
The Newspaper for the Future of Miami
Connect with us:
Front Page » Education » Trolley tie to Florida International University derailed 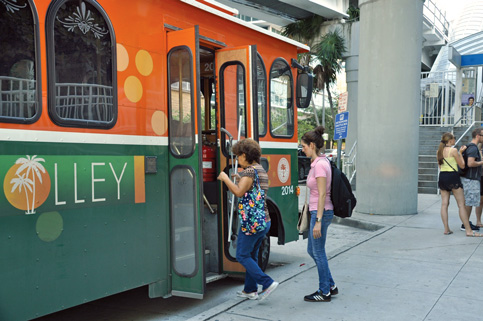 A proposed trolley route serving unincorporated Miami-Dade between the City of Miami’s westernmost neighborhood and FIU hit a legislative snag last week when lawmakers in a county transportation committee shelved the plan indefinitely.

Commissioner Xavier Suarez, who sponsored the item that would have directed the county administration to look at using trolleys or 30-foot buses made to look like trolleys, called the route “a hell of a solution” for workers, students and teachers in need of a better or additional link to the area.

Daniella Levine Cava said she supports helping commuters get to and from FIU but was “puzzled” as to how a new trolley route in the area would align with nonprofit Transit Alliance Miami’s redesign of the county’s Metrobus route network, which began with a commission OK in May and now nears completion.

Dennis Moss and Eileen Higgins focused instead on how infrequently the theoretical new trolley’s link to the city is used.

The Flagami Trolley, which launched in June 2018 as one of several three-year demonstration projects the county transportation board approved to be funded by countywide half-penny transit tax dollars, is the city’s second-least-productive route.

Information provided by Transit Alliance shows the trolley averages just 7.4 boardings per hour, resulting in a cost to the city of $7.48 per ride.

Instead of adding a second trolley to feed off one that is already performing poorly, Mr. Moss said, the county should consider extending the existing service to reach FIU.

“That way we would not be duplicating services,” he said.

Ms. Higgins said the Flagami Trolley’s existing route was so confounding she doubted anyone could understand it, passing an image of the route on her phone around to demonstrate her point.

Mr. Suarez, she said, should have presented his idea to the Transit Alliance as a problem rather than a solution and let the group incorporate the query into their pending “Better Bus Project.”

“This is, just again, designing public transportation from the dais when we are in the midst of trying to do a data-based analysis of how we can move the maximum number of our residents,” she said.

On Friday, Mr. Suarez told Miami Today that he “felt blindsided” by the comments of Ms. Higgins, who he said is “a person you’d think would be very much in favor of this.”

The transit system here indeed needs reforming, he said, and trolleys servicing areas throughout the county are part of the solution – both in cities and in unincorporated areas.

“When they talk about a better bus project, it’s the trolleys. Those are the better buses, managed by the cities,” he said. “That philosophy and approach has to win out. Maybe that takes a 2020 election.”

One Response to Trolley tie to Florida International University derailed