Advertisement
The Newspaper for the Future of Miami
Connect with us:
Front Page » Top Stories » Atlantic Sapphire building ‘largest aquaculture facility in world’ 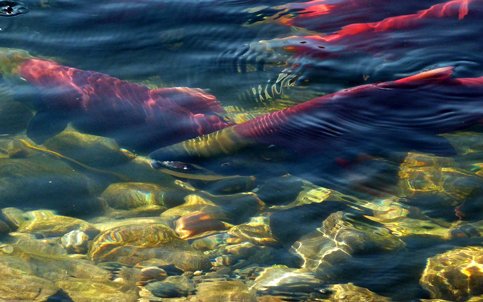 Atlantic Sapphire, an indoor salmon farming company founded in Norway nearly a decade ago, is on track to finish the first of three construction phases on a sprawling facility in Miami-Dade’s Redland by July.

Once completed, it will be “the largest aquaculture facility in the world.”

That’s according to CFO José Prado, who told county commissioners Tuesday that the company aims to increase its investment here six-fold, from $30 million to $185 million, by the middle of next year, when it expects to reach an annual production rate of about 10,000 metric tons of fish.

The company has secured US water permits to produce nine times that amount here yearly, its website says.

The 390,000-square-foot facility near Homestead General Aviation Airport being built as part of Phase 1 comprises roughly 9 acres under a climate-controlled roof and houses about 60 employees and 3 million fish in operations testing, Mr. Prado said.

“As in agriculture, you have greenhouses,” he said. “We call our facility a Bluehouse.”

The company imports eggs from Iceland and Norway. Two truckloads of feed are expected to come in daily to the facility once it’s operational, with two trucks of whole fish and fillets going out at the same rate.

The fish go through a 20-month growth cycle, moving to larger and larger tanks to simulate their natural spawning process. Ten months after hatching in freshwater, they move to saltwater tanks, where they spend another 10 months before reaching full maturity – and harvest weight – at 10 pounds.

“Unlike other fish, they go fresh, brackish, salt, brackish, fresh – they make the fish swim from one tank to another and change the conditions, with currents and all of that,” Miami-Dade Mayor Carlos Giménez told Miami Today. “It’s really high-tech stuff.”

According to Mr. Prado, the salmon perpetually swim in one- to two-knot currents: “[They’re] constantly exercising.”

The fish-producing industry, through conventional farming methods, has grown so massive that companies are now unable to expand without a multitude of challenges, he said.

“They’re dealing with untreated fish waste in the bays. The fish are exposed to disease. They escape. [There are] lots of micro-plastics,” he said. “With Atlantic Sapphire’s method, all of this goes away.”

The land-based approach also reduces the county’s carbon footprint, he said, because it eliminates the need to fly in as much fresh fish daily. None of the 10 commissioners on the dais asked whether that reduced carbon footprint would be offset by planes carrying fish out of the county to other destinations.

Asked by Commission Vice Chairwoman Rebeca Sosa whether the company plans to expand to China and Russia, both of which are investing heavily in the industry, Mr. Prado said that while those expansions are indeed happening, Atlantic Sapphire “at this time has made no other commitments beyond the first phase here in the county.”