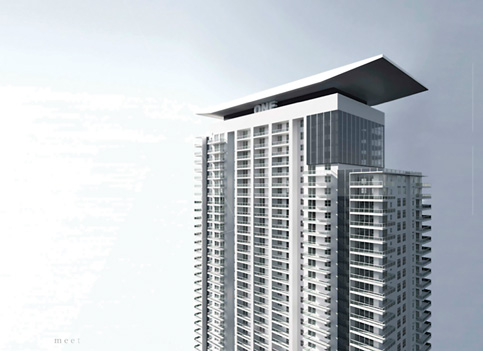 The city’s Urban Development Review Board is recommending approval of a renovation plan that would change the look of a tower that has stood in the southern Brickell Financial District for more than a decade.

Luis Lamar, representative of the owner, presented site plans and renderings of the tower and the attached parking structure to the review board at its last meeting.

The primary focus was on a plan for new screening or façade for the multiple-level garage, particularly the area facing South Miami Avenue.

Photos of the existing structure show a typical parking facility with wide-open levels in the concrete floors. There is a rooftop swimming pool.

Documents filed with the city show Phase I of the renovation to include about 556 parking spaces in eight levels.
The review board approved a motion recommending approval of the new garage façade on a 5 to 1 vote, with Fidel Perez voting no.

He had complained that the documents presented only showed one side of the property.

“It would have been good to see all sides, so we could look at them all,” Mr. Perez said before the vote.

The tower is home to rental apartments, 372 units in various sizes and floor plans. Amenities beyond the pool include a gym, recreation room and theater.

The tower and garage were completed in 2005. The property is east of South Miami Avenue, west of Brickell Avenue, and north of Southeast 15th Road. One Broadway is situated where Southwest 14th Terrace intersects with South Miami Avenue.

According to the property’s website, new offerings will include first floor retail with landscaped plaza, and a tennis court and 9th floor garden terrace.

Board member Robert Behar commented on one rendering showing a brand new rooftop for the tower.
“It looks great,” he said.

Mr. Lamar said there are several phases to the renovation and they are working from the bottom up. The idea for the new topper is to cut the arch and flatten the roof – “make it look more modern,” he told the board.

Joseph Eisenberg, a city planner and liaison to the board, reminded board members they were only to review the proposed garage screening.

In a Nov. 11 letter to the city, Mr. Lamar said the owner is upgrading the original garage façade comprised of pre-cast concrete panels with a new artistic surface “to complement the contemporary design elements in our revitalized building façade, retail and restaurant area.”

He added: “The new design at the southern entrance of Brickell welcomes residents and visitors through seamless transition of a pedestrian friendly experience as they walk towards the core of Brickell. Other enhancements to the building, as shown in our presentation, include new pedestrian friendly covered terraces and sidewalks, changes of exterior paint color, and selective window upgrades.”

“The goal is to update this building, make it be more of a complement to the new designs we are seeing in the Brickell area,” Mr. Lamar told the board. “We are at the foot or the entrance to Brickell.” The proposed screening for the parking levels will be large stainless steel panels, fabricated in Germany, 10-foot-wide sheets extending 75 feet in length, suspended and held taut against the structure, he said.

Mr. Lamar said the idea of the design is minimalistic and simple, yet applied in order to lift and brighten the property.

The planned façade will afford some protection from the elements, he said, and the screening will be backlit at night so it’s a more pleasant experience. “The idea is to freshen, lighten up [the building],” he said.

“I commend you,” Mr. Behar told Mr. Lamar, for trying to make a much better façade for the building. He said he likes the material, and his only suggestion would be to stagger the large panels into different sizes and lengths to “break it up, give it a little more play … otherwise, a very nice job.”

Board member Ignacio Permuy said, “Anything you do is a huge improvement on what’s currently there.”

Speaking of the longevity of the new façade, Mr. Lamar said the stainless steel should look nice for a long time.

Board member Ligia Ines Labrada said she commended the owner for wanting to improve the look of the property, including efforts to better activate the street for pedestrians.

Mr. Behar made the motion to recommend approval of the façade, with a suggestion that the owner consider more articulation of the screening panels.