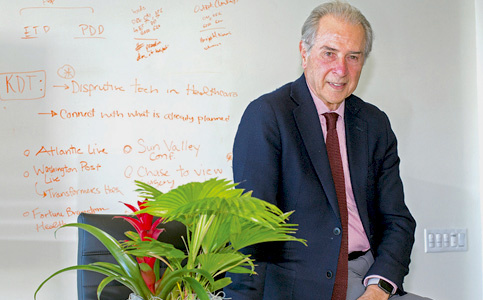 For many, being named one of the finest living architects in your native country would stand as a career high. But for Rodrigo Arboleda, co-founder and CEO of Fastrack Institute, the designation is something of a footnote.

In 1970, while still working as an architect, Mr. Arboleda became president of one of the first fresh-cut flower export companies in Medellín, which he says became “a model of development for the country.”

He’d moved to Miami to set up a trade office. Shortly after, tragedy struck his family. Over the course of three years, he and his wife, Cecilia, lost three young daughters to the same illness.

They stayed in Miami, seeking stability amid horrendous drug trafficking issues in Colombia and to fight for their children’s lives. He accepted a job offer from the Colombian government marketing bananas – an industry devastated amid rising tensions there.

Between 1980 and 1984, he opened ports throughout the states and in Europe, tripling sales and resuscitating the dwindling market. When banana sellers became self-sufficient, they no longer needed government help.

“As a consequence of that, I was out,” he said.

Over the next 25 years, Mr. Arboleda charted the successes of several companies. He righted the course of cargo company Tampa Airlines, which was in dire jeopardy after the largest shipment of cocaine in history was found stowed in its holds.

Between 1992 and 2000, he served many roles with Fortune 100 company Ogden Corp. As its executive vice president, he led business development throughout Latin America, Spain and Portugal. That role led to work managing all 33 airports in Argentina and service as the president of La Rural de Palermo, then the largest fair and exhibition ground in Latin America.

In 2000, he reconnected with old classmate and fellow architect Nicholas Negroponte, founder of the Media Lab at MIT, who for years had worked on how best to engage children with digitized information.

Together, they set out on a philanthropic effort to find the answer, a mission that led to trials in Colombia, Pakistan and Senegal in Africa. The experience, he said, “inoculated [him] with a passion for education and technology.”

In 2006, Mr. Negroponte called with another proposition.

“He said, ‘We’re thinking of putting together something that gives a child in the Amazon, the Andean mountains or the African savannah the same type of quality and quantity of access to information as the most privileged child in New York, Tokyo or Berlin. Would you like to join me?’ I said, ‘Of course. Count on me.’”

Mr. Arboleda thus served as CEO of the One Laptop Per Child project from 2007 to the end of 2014. Over that time, he said, the project gave out close to 3 million laptops in 51 countries and 21 languages.

“That became the pride of our life,” he said. “When the child is not a spectator but an actor, when he’s performing his own desires of how to learn, the whole element of learning changes.”

Mr. Arboleda’s latest chapter began in 2016 with Fastrack Institute, a nonprofit that aims to accelerate the development and adoption of exponential and often disruptive technologies into societies for positive change.

Mr. Arboleda sat down with reporter Jesse Scheckner. The interview, recorded by Jahmoukie Dayle, can be viewed below.