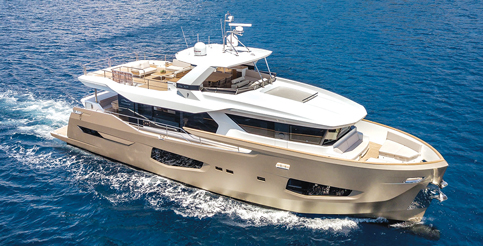 The Miami River Commission on Monday approved in concept the plans of Puntallana LLC to put a six-story commercial building and an ancillary restaurant on a riverfront parcel at 301 and 311 NW South River Drive in the Riverside section of Little Havana.

The small lot has an irregular shape and is now underutilized, said a petition by Steven Wernick of Wernick & Co., attorney for Arturo Ortega, Puntallana LLC’s managing principal. It’s home to a one-story warehouse built in 1946 and a vacant two-story structure built in 1951.

The warehouse will be demolished and replaced by a six-story building with offices, a showroom and storage space for tenant NuMarine, which manufactures, outfits and sells yachts, while the two-story building will be renovated as the restaurant.

“We do not want another restaurant,” said Carlos Salas, president of the Spring Garden Civic Association. “We hear noise all Thursday, Friday, and Saturday nights. Imagine adding another.”

There is also no parking onsite, which worried several commission members, including Eileen Higgins, a county commissioner whose district includes Little Havana.

“My concern is parking,” she said. “That road is a two-lane cow path. Uber and Lyft drivers cannot be blocking that street.”

Mr. Ortega said his company also owns two parking lots at 742 NW Fourth St. and 720 NW Second St., and would offer valet service to and from the restaurant; there is also on-street parking. The site is in a transit corridor where parking requirements may be eased.

“There is a residential neighborhood to the west,” Ms. Higgins said. “We don’t want to create a neighborhood of parking lots, and the coming and going of parking guys running back and forth with keys late into the night is going to be disruptive to residents.”

Rogue behavior on the river by pleasure boaters and jet skiers who tie up at restaurants is also a neighborhood issue.

“The quality of life in Spring Garden and Little Havana has been ruined by the restaurants on North River Drive,” said resident Rick Deever. “Don’t ruin it on South River Drive, too.”

The site has dockage for four boats, but NuMarine will probably use those slips, Mr. Ortega said.

“I have a lot of concern about the ramping up of vessels,” said commissioner Philip Everingham, the designee of Michael Karcher, chair of the Marine Council. “I’m not sure the restaurant is going to be concerned with it over the weekend.”

“NuMarine wants to protect its boats from injury,” Mr. Ortega said. “They don’t want misbehavior.” No recreational docking is allowed by lease, he added.

“There has to be give and take,” said commissioner Thomas Kimen III, the designee of Dr. Ernest Martin, a neighborhood representative appointed by the Miami Commission. “This is an incredibly challenging site, and across the river from Casablanca, Garcia’s and Crust [restaurants]. Keep in mind that the river presents a complex variety of issues.”

By tying the owner up with restrictions, the commission would be prohibiting him from the use of his property, said Horacio Stuart Aguirre, the group’s chair.

The commission voted to approve the application, with the addition of the offsite parking and the requirement that if NuMarine ends its lease, the commission be notified within 30 days. Commissioners Frank Balzebre (a designee of Mayor Carlos Giménez), Patricia Harris (a designee of former Gov. Rick Scott), and Rosy Noguera (a designee of Sara C Babun, an appointee of the county commission) dissenting. Ms. Higgins had left the meeting before the vote.