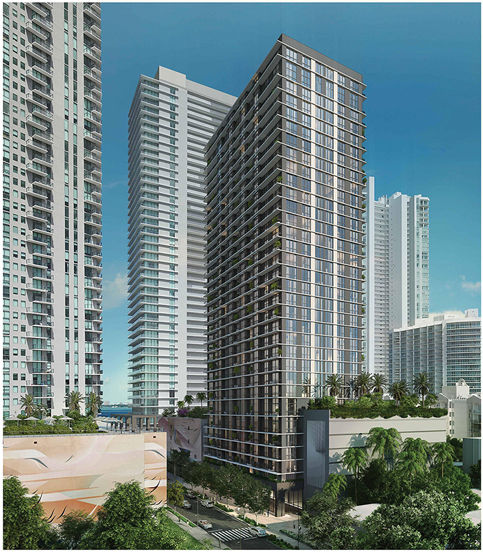 The growing Edgewater neighborhood in the City of Miami is getting another mixed-use residential tower to be called Paraiso Place at 452 NE 31st St.

The city’s Urban Development Review Board on Nov. 20 recommended approval with a few conditions.

The principal frontages will be on Northeast 31st Street and 30th Terrace, with the on-site enclosed garage wrapping the residential tower on three sides with an artistic treatment. The site plan includes 32 on-street parking spaces.
In a letter to the city, Steven J. Wernick, an attorney representing the owner-developer, said the applicant has been working thoughtfully on Paraiso Place and its design for some time, studying the ideal development program to complement the continued evolution and revitalization of the Paraiso District, between Northeast Fourth Avenue and Biscayne Bay.

“Notably, the Project consciously provides an inviting and significantly improved ground floor pedestrian experience for residents of the building and of the surrounding neighborhood, enhancing the connectivity and walkability from Biscayne Boulevard east to the new condominium towers lining Biscayne Bay,” Mr. Wernick wrote.

The site is between Northeast 30th Terrace and 31st Street immediately west of the Paraiso District developed in recent years by The Related Group, which has been accompanied by significant infrastructure improvements and other changes to the area, he said.

Mr. Wernick said the site is directly adjacent to the west of Gran Paraiso Residences; across Northeast 31st Street to the south of a vacant lot and the parking garage of Paraiso Bayviews Residences, and will further complement recent development in the area.

Mr. Wernick told the board the Paraiso Place project will bring connectivity to the neighborhood.

A promenade will feature a wide sidewalk, helping to activate the street, “something Edgewater needs,” he said.
The centrally located Property is a short walk to Biscayne Boulevard to the west and Biscayne Bay to the east.
The planned residential units begin on level 2 and extend to the 32nd floor, with unit sizes ranging from 700 to more than 1,300 square feet.

Mr. Wernick said the ground floor commercial spaces, opening to both Northeast 30th Terrace and 31st Street, will be well-suited for restaurant, bakery/café and neighborhood-oriented retail.

The project includes amenities at the seventh floor to serve residents, with a pool deck and covered terrace adorned and screened by landscaping. The mechanical equipment is screened under trellis features that rise to the 8th level.
Considered in combination with the promenade along Northeast 31st Street and activated residential and commercial program on the north façade from ground level to roof, the project provides a “uniquely urban and people-centric experience” to Edgewater, Mr. Wernick said.

“The Project brings a conscious approach to scale, urbanism and connectivity of people to place. While Edgewater has seen a number of beautiful high-rise condominiums constructed in recent years, these buildings are primarily oriented to Biscayne Bay and have left a noticeable gap in the built environment with few improvements or new buildings along NE 4th Avenue, and missing any new rental product – as most development has catered to a luxury condo minimum market,” he wrote.

Mr. Burgos presented site plans and renderings of the tower and garage, saying design elements will help to create dramatic shadows and combine to “make the project come alive.” Materials will include paint stucco walls, tinted glass windows, and aluminum screening for the artwork surface around the parking levels.

Mr. Robles said he is very excited to work on the project, saying his concept is rooted in his fascination with sunlight, and the artistic treatment will interact with neighboring structures and the existing environment.

The owner-developer is requesting waivers including: allowing vehicular ingress/egress from a primary frontage; a 10% reduction from driveway dimensions; allowing parking in the second layer along Northeast 30th Terrace; and up to a 30% reduction in required parking for projects near public transit.

Board member Robert Behar said the design is basic and missing “pop” to help articulate the structure.

“It looks very simplistic,” he said. Mr. Permuy also said he’s concerned about the proposed art and how it will integrate with the architecture.

Board member Fidel Perez said he also agreed: “the building needs some work – but it has a lot of potential. Maybe it’s the wrong color scheme. The roof could use some attention … but overall, the design is good.”

Mr. Behar was also critical of the placement of two “enormous” air conditioning units on the amenity deck, saying they will adversely impact the project with “the noise and the heat those units will produce … I would do something different.”

The board’s recommended approval includes conditions: that the applicant reconsider the type of and placement location for the air conditioning, consider more articulation to the façade, and have the artist work with the planning director to provide more detail about the planned artistic screening of the garage.

Mr. Wernick said after the meeting that the proposed artwork is a dual-concept sunset-sunrise for the north and south facades.

In an email to Miami Today, he said: “In their approval of the project, before I had a chance to say anything, it was nice to see them step back and acknowledge the artwork has potential to be an effective screen and a very interesting complement to the building’s architecture, and asked we work with city staff on the scale and color palette to ensure the artwork is contextual in scale and becomes a positive addition to the neighborhood.”

In his letter to the city, Mr. Wernick said Mr. Robles is a Miami-born artist whose work ranges from small-scale drawings to sculpture to large murals. Mr. Robles has exhibited throughout North and South America and Europe and is highly regarded as a local artist on the rise in the art world, he wrote.