Advertisement
The Newspaper for the Future of Miami
Connect with us:
Front Page » Transportation » Virgin Train to run from PortMiami to Disney World

Virgin Train to run from PortMiami to Disney World 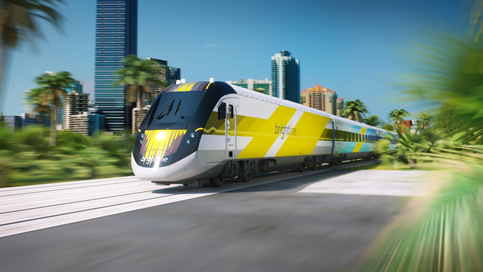 Within three years, Florida’s visitors and residents may be able to go to Disney World or Universal Studios, then take a Virgin Train directly from Orlando International Airport to PortMiami and board a cruise ship – or vice versa.

That potential boon to the Sunshine State’s tourism industry moved closer to reality Tuesday, when Miami-Dade lawmakers unanimously OK’d terms of an estimated $53.3 million project with Virgin to build a station at the state’s leading economic generator by 2020.

“This is a first-of-its-kind train to port station that will connect the cruise capital of the world with a car-free option for millions of cruisers looking to start their vacation a little earlier,” Virgin Trains President Patrick Goddard said in a statement. “This is a tremendous partnership and infrastructure investment between PortMiami, Miami-Dade County and Brightline that will increase mobility, take cars off the road and provide our state’s visitors an easier way to get around.”

The county expects to receive $49 million in rent and passenger fees over the deal’s 30-year initial term, a memo from Deputy Mayor Jack Osterholt says.

If all three renewals are tapped for a maximum 90 years, the county expects to collect $490 million.

Costs for the project include $15.4 million to build the 20,500-square-foot station on at least one acre of the seaport, $35 million for a 240-passenger train set and other overruns to be paid by Virgin.

The county would invest $5.2 million, for which it would be repaid through a $2 fee per departing rail passenger.

Jean Monestime, the only commissioner on the dais to comment on the item, said he hoped the fee would be charged to cruise ships’ passengers “instead of just a segment of the population.”

Neither Ms. Sosa nor any other commissioner moved to amend the item.

For the first 10 years of the accord, Virgin would agree to not operate a train station at any other port.

The company would pay all operations and maintenance costs for the stations, trains and customer service, including passenger shuttles to cruise terminals.

Virgin would also upgrade its tracks at the seaport as part of the development. However, it would still have to share the tracks with other rail operators “actual and future,” the memo says.

The deal also includes provisions for Virgin to relocate to another site at the port “that would serve as a more optimal location” or use space at that site for supplemental purposes.

Virgin this month launched Phase II of a multibillion-dollar project connecting its West Palm Beach station to Orlando, with potential stops in Fort Pierce and Stuart. The company estimates completing Phase II, which includes laying more than 170 miles of new tracks, will take about three years.