Advertisement
The Newspaper for the Future of Miami
Connect with us:
Front Page » Profile » David Schwartz: Leading the Florida International Bankers Association 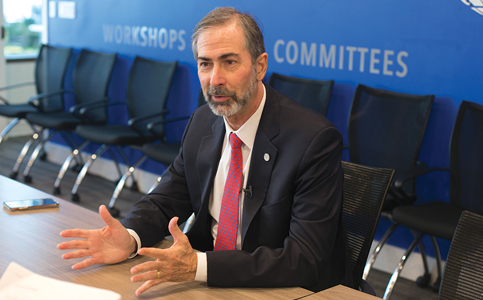 Though it’s his second stint at the Florida International Bankers Association (FIBA), David Schwartz says his current role as president and CEO is the best job he’s ever had.

“All my languages, all my international experiences, my banking experience, and my legal background, I get to use all of it. It’s never boring.”

His resume of over 30 years in banking includes time overseas in Latin America for Banque Sudameris as well as being senior vice president and international compliance risk manager for Regions. Though he planned to work in China, having studied Mandarin Chinese, he said he was pulled to Latin America, where he found his second home in Argentina.

With FIBA having recently reached its 40th anniversary, it has broadened its scope under Mr. Schwartz. He has focused on advocating for the needs of the financial industry, whether it be in Washington, Tallahassee or abroad. He’s also helped increase FIBA’s membership at a time banks are consolidating by including technological companies, law firms, consultants and more.

Mr. Schwartz sat down with reporter Gabriel Poblete. The interview, recorded by Jahmoukie Dayle, can be viewed below.