Advertisement
The Newspaper for the Future of Miami
Connect with us:
Front Page » Top Stories » Terminal Island residential tower in Coast Guard quandary 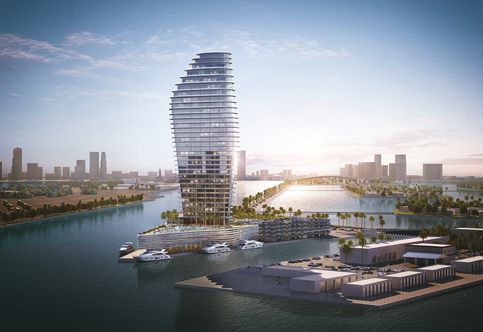 A proposed project on Terminal Island in Miami Beach remains in limbo as the developer has yet to find a way to quash the concerns of the Coast Guard.

Related Group has proposed a 90-unit residential tower on Terminal Island, located across from Star Island on the MacArthur Causeway. The proposed project would share the area with the Fisher Island Ferry, the Florida Power & Light substation, the Miami Beach Fleet Management facility, and accessible from a connecting bridge, the Coast Guard’s base, housing about 200 personnel.

The proposed project, called One Island Park, would bring a tower taller than 400 feet on 3.71 acres, with homes starting at $5 million. Related had also proffered updating the city’s over 50-year-old fleet management facility if the tower were approved.

While there have been ongoing talks, the deadlock has yet to be solved, according to a statement from Capt. Harry Mautte emailed to Miami Today.

In response to further questions, it was stated that the Related Group was unable to provide a revised proposal that would alleviate the concerns that had previously been brought up by the Coast Guard. One of those concerns was who exactly will be living in the location.

Another concern that was previously raised by Capt. Mautte was that a portion of the base that is facing the proposed location of the building is where the Coast Guard conducts its most sensitive operations, including narcotics offloads and transferring detainees, migrants and people seeking asylum.

A statement from Jon Paul Pérez, vice president of Related Group, said talks are still ongoing with the Coast Guard.

“Related Group continues to have productive conversations with the Coast Guard. We continue to advance plans for One Island Park, while also looking at all options that are viable within the current zoning, including office,” according to the statement from Mr. Pérez.

Mr. Pérez had previously said that the views of the building would be shifted so none of the windows would face the Coast Guard facility.

Proposed as an alternative to the residential tower is an office building, which the Coast Guard conceded was allowed under the current zoning.

“The Coast Guard would prefer to not have any elevated structure built on the land,” the Coast Guard response reads. “However the land is zoned for light industrial which is consistent with a commercial building.”