Advertisement
The Newspaper for the Future of Miami
Connect with us:
Front Page » Government » PortMiami deals to create 27,500 jobs, mayor says 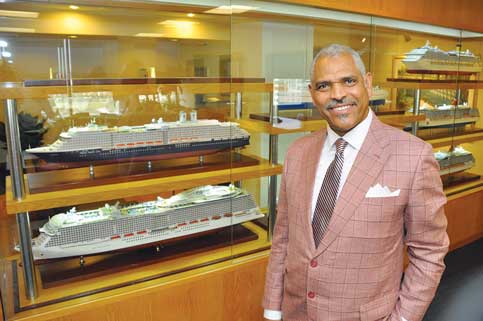 It took all of an hour for Miami-Dade lawmakers to sign off en masse last week on a series of terminal agreements that promise to maintain PortMiami’s distinction as the “Cruise Capital of the World” for many years to come.

The deals with Carnival Corporation, MSC Cruises, Norwegian Cruise Line Holdings and Virgin Voyages, whose terms range from 20 to 62 years, as well another deal in the works with cargo company Terminal Link, will make a $7.8 billion impact here yearly and create 27,500 direct and indirect jobs, Mayor Carlos Giménez said.

But despite ample planning, the complicated, voluminous contracts did not reach commissioners’ desks until late the night before they were to be approved, according to Chairwoman Audrey Edmonson. And two of the deals still needed last-minute changes.

“There’s no way in the world we can review all of this overnight,” she said, holding up a thick binder packed with hundreds of pages detailing one of the agreements.

Still, commissioners agreed they’d been thoroughly briefed on each agreement’s details and felt comfortable putting them to a vote – though that’s not necessarily the point, said Daniella Levine Cava.

Carnival Corporation, which first struck a terminal deal with the county in late 1998, extended its preferential berthing rights at PortMiami’s Terminals D, E and F for 20 years plus two seven-year renewal options, beginning around Oct. 31, 2022, when improvements at Terminal F are expected to finish.

With a 47.4% share of the cruise passengers market, per Cruise Market Watch, Miami-based Carnival is by far the largest cruise operator in the world.

Should the company exercise both renewal options, the county expects to receive about $921.4 million in gross revenues.

The county agreed to shoulder up to $175 million to upgrade the terminal, of which Carnival agreed to reimburse $65 million.

Carnival is obligated to homeport at least one 6,500-passenger “XL Class” ship at the port and another by Oct. 1, 2026, once $20 million in additional upgrades to Terminals D and E end.

The agreement further gives the county berthing rights Mondays and Fridays, from Oct. 1, 2023, to Sept. 30, 2025, at a terminal of Carnival’s choosing for one Disney Cruise Line vessel.

Finally, the agreement states that the county and Carnival must begin talks to design and build a 5,000-space parking garage and related amenities in an area adjacent to Terminals D, E and F within one year after the agreement takes effect.

Seven years after MSC Cruises signed its first berthing agreement with the county, Miami-Dade commissioners ensured the company will be here for another 62, over which time the county expects to receive $2.03 billion in rent, parking revenue, a 25% share of non-vessel terminal fees and $5.50 per passenger movement fees, subject to a compounded 3% increase yearly.

PortMiami Director Juan Kuryla said the deal represents “probably the longest-term deal that we’re aware of in the history of a port and a cruise line.”

Under the new deal, the company – the largest privately held cruise company in the world, with a 7.2% share of passengers – will relocate its stateside corporate offices from Broward County to PortMiami.

Commissioners in April gave MSC an early OK to build two new “mega cruise terminals,” a parking garage, offices, four gangways and other supportive infrastructure on 20 PortMiami acres. The company agreed to pick up all costs of construction, more than $300 million.

Cruise Terminals AA and AAA, once built, will be able to handle two 7,000-passenger ships at a time.

A rendering the company showed commissioners several months ago of the development, designed by firm Arquitectonica, showed a sleek, green-roofed terminal resembling a cruise vessel in motion with the words “Coming in 2022.”

Norwegian Cruise Line’s new 30-year deal with the county will begin either when construction of a new Terminal B is substantially complete or on May 29, 2020, whichever comes first.

The terminal agreement commissioners signed last week is for five years longer than the original one they adopted one year before. The added five years, Deputy Mayor Jack Osterholt wrote in a memo accompanying the new deal, will generate 9 million more passenger movements and $326 million in additional revenue to the seaport.

Miami-based Norwegian, whose Oceania Cruises, Regent Seven Seas and titular cruise line served 9.5% of all cruise passengers last year, is the third-largest cruise company in the world behind Carnival and Royal Caribbean.

The total project budget for the new terminal and all project-related architecture, engineering and design costs rose from an expected $165 million in April 2018 to $239 million last week.

The county agreed to spend $100 million on the project. Norwegian agreed to reimburse the county for additional expenditures up to $239 million beyond that, including 6.5% interest plus costs and fees.

“In the event project costs exceed $239 million, [Norwegian] is obligated to advance and pay any and all [excess] costs…” the memo said.

Nearly five years after Virgin Voyages announced plans to enter the cruise market, the Plantation-based joint venture between the Virgin Group and Bain Capital agreed to make PortMiami’s planned Cruise Terminal V its exclusive Florida homeport for the next decade, as well as the only homeport the state’s east coast through 2051.

The 30-year deal, set to start either upon completion of the new cruise terminal (formerly Terminal H) or by Nov. 1, 2021, whichever is earlier, also includes two five-year renewal options.

Miami-Dade will initially cover the $179 million cost of building Terminal V on roughly 5.1 acres, with Virgin to partially reimburse the county over time with interest through an up to $8.70-per-passenger surcharge on its first 16.62 million passenger movements, Mr. Osterholt wrote.

Once Terminal V is built, Virgin will relinquish its preferential berth at the port’s Terminal F.

The county expects to receive $697 million in cruise-related revenue and capital recovery surcharges through the initial 30-year term. If Virgin exercises both renewal options, the county anticipates it will receive $1.012 billion total.

Until the terminal is completed, the first of those ships, the Scarlet Lady, will port at Terminal F and begin sailing to the Caribbean in April.