Advertisement
The Newspaper for the Future of Miami
Connect with us:
Front Page » Real Estate » Overtown tower to have 98 of 616 units micro-sized

Overtown tower to have 98 of 616 units micro-sized 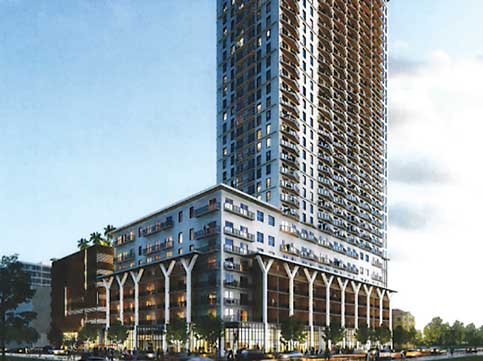 A developer plans a mixed-use apartment tower in Overtown providing more than 600 rental units, with nearly 100 being micro-sized.

The city’s Urban Development Review Board recommended approval on Sept. 18, with a few recommendations.

The overall project totals 813,254 square feet. Block 45 is designed with up to 616 residences, and 98 of those will be micro dwellings, according to the application.

The property is owned by Miami-Dade County and now is a surface parking lot.

It is in the urban core and part of the downtown area that is experiencing massive change with the growth and evolution of the MiamiCentral transportation hub, and its related development 3 MiamiCentral, a new office building with a grocery at ground level. The site is near the new transportation station, home to Brightline/Virgin passenger rail service.

The property’s north boundary is along the prominent Northwest Eighth Street corridor.

Atlantic Pacific has leased the land from the county as part of the development plan.

The applicant seeks approval of a warrant for the micro units.

The city’s Miami 21 zoning ordinance allows micro dwellings as a residential use within a certain proximity to a Transit Oriented Development, area or TOD.

Micro units aren’t permitted on properties that abut a T3 single-family residential zone and must contain a minimum of 275 square feet of floor area.

In an application to the city, Ryan Bailine, an attorney representing the developer, said the design provides for a single tower as opposed to a phased, multi-tower development, “reducing the overall building mass of the project and mitigating construction impacts” to the surrounding properties and neighborhood.

Beyond the micro units, the building is to have 1- to 3-bedroom units at market and workforce price points.

“The Project’s residential component will provide a new and diverse housing product within a short walking distance from multiple modes of mass transit and significant employment centers in or near downtown Miami,” he wrote.

The project’s location so near public transportation “requires activation of the pedestrian realm at the ground level, which the Applicant satisfies with retail space on all four frontages,” Mr. Bailine said.

The developer is requesting waivers including up to a 30% reduction in required parking, allowed for sites within a half-mile radius of a Transit Oriented Development area.

Other waiver requests include permission to substitute one industrial loading berth for two commercial loading berths; permission to allow a zero-foot ground level dominant setback for the secondary frontage along Northwest Seventh Street; permission to permit parking to encroach into the second layer, above the first story, along the primary and secondary frontages; allow the maximum building floor plate length to be up to 10% longer than the 180-foot maximum length for residential uses above the eighth floor; and allow a 10% increase in the residential floor plate.

Attorney Ethan B. Wasserman, also representing Atlantic Pacific, presented the project to the review board and gave its history, noting the county issued a request for proposals for the land and the Atlantic Pacific was chosen and negotiated a ground lease.

Mr. Wasserman said the lease requires that the building have a high level of affordable housing, with up to 60% of the housing units be affordable or workforce units.

“This is a true mixed-income building, and they are very proud of that,” he said.

The ground floor commercial space will be on all sides of building, important to activate all sides to pedestrian uses, he said. The project will include an elevated swimming pool, which will be open to all tenants, Mr. Wasserman explained. “It will not be split between [rent] levels but will be shared among all.”

Mr. Wasserman said timing is critical, in large part due to the varied governmental reviews and requirements, from county, state and federal agencies.

Raul Carreras, an architect with Bermello Ajamil & Partners Inc., is working on the project and offered details.

He said the large ground floor retail uses will help draw in neighbors from many new residential offerings as well as the established residences in Overtown.

The design helps to create a strong view corridor in the evolving streetscape, he said, and the layout helps to activate the courtyard space.

“Without a doubt, that outdoor courtyard will be highly used area,” he said.

Construction on the garage will begin separately but eventually be conjoined. Mr. Carreras said this will allow for the garage levels to be built more quickly and efficiently, and help the builders “internalize all our activity”  so as to limit impacts on neighbors.

Mr. Carreras noted the proximity to the historic Lyric Theater. He said efforts were made to incorporate design elements reflecting Bohemian culture.

“With these design elements we tried to modernized them and bring them into building,” he said.

“I think the scale is very humungous,” said board member Neil Hall. He also said developers ought to spend more time on affordable housing developments ensuring ways that existing residents are able to take advantage of these new, so-called affordable housing opportunities.

“I’m still a little taken aback by the scale … I’m not totally convince the scale is appropriate,” Mr. Hall said.

Board member Dean Lewis also commented on the tower’s design, saying the façade was missing detail. “There’s nothing happening in the body of the tower,” he said.

Acting Chairman Ignacio Permuy said, “I think you guys did a great job. It is a challenging program and I think you resolved the spaces.” He said he was OK with the massing and added he especially likes “the corner treatment.”

The motion to recommend approval includes these recommendations: have the developer’s team reexamine the placement of the VIP drop-off area near the lobby, revisit the scale and articulation of the main body of the tower, and consider integrating more a more artful façade into the screening of the garage.