Advertisement
The Newspaper for the Future of Miami
Connect with us:
Front Page » Communities » Board gives thumbs-up to colorful Allapattah project 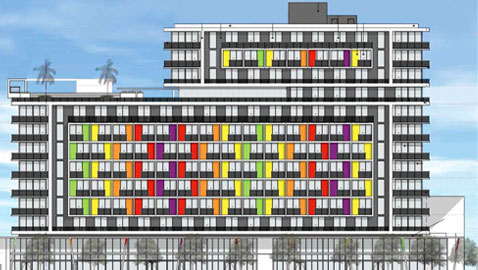 A colorful mixed-use apartment building is coming to the heart of Allapattah, bringing with it retail uses and office space.

Miami’s Urban Development Review Board has recommended approval of the project.

It’s a mid-block location. “We are between two businesses … we have neighbors on both sides,” said Iris Escarra, an attorney representing the owner-developer.

The site is between a Walgreens and Popeyes Louisiana Kitchen.

“The Project will provide additional housing and retail options within walking distance of a TOD (Transit Oriented Development) area and one of the City’s most important employment centers,” Ms. Escarra wrote in a letter to the city.

“The Health District is home to the City’s principal health care, research, non-profit, educational and judicial institutions. This area is in great need of additional housing options to serve the thousands of individuals who work in the area,” she wrote.

The property has a lot area of 73,449 square feet, or 1.686 acres. The site holds a one-story warehouse that is to be demolished as part of the project. It’s within a half-mile of a Transit Oriented Development area centered on the Santa Clara Metrorail Station.

The project was designed by Behar-Font Partners P.A.

The 12-story building reaches a height of about 150 feet, with parking for 15 bikes. The site plan shows 9,113 square feet of open space.

The developer seeks approval of several zoning waivers. One asks to allow above-ground parking to extend into the second layer beyond 50% of the length of the secondary frontage, with an art, glass, or architectural treatment of a design approved by the planning director, with the recommendation of the review board, provided for that portion of the façade.

Ms. Escarra said the project proposes an extension of parking into the second layer along the secondary frontage (Northwest 21st Street).

“This extension into the Second Layer is necessary in order to accommodate the required parking for the Project and to limit the parking garage component of the Project to three (3) stories. An art or glass treatment will be provided for the length of the façade, with said treatment being approved by the Planning Director, with recommendation from [the review board],” she wrote.

Other requested waivers include up to a 10% reduction in the drive aisle width, from the required 23 feet to 22; a 10% increase in the maximum building length above the eighth story from 180 feet to 198; to permit a 4% increase in the maximum floorplate above the eighth story from 15,000 square feet to 16,500; and to permit up to a 40% parking reduction for properties within a half-mile of a Transit Oriented Development.

Multiple colors are planned for the façade, and a large mural, “which remind us of the produce and cut flowers” of the Allapattah produce market, said one of the designers.

The site plan shows the retail spaces made as a continuous pedestrian experience, and the project has a large canopy and a small paseo leading to a park.

The screening on the parking levels will employ vertical aluminum fins.

“Good job on the massing of building, the playfulness of the facades … there’s nothing like this in this area,” he added.

Board member Neil Hall commended the developer’s team on breaking up the mass of the structure. He did question some of the proposed locations for murals.

“I like that you really activated the back … with colors,” said board member Ligia Ines Labrada.

Chairman Gerald Marston voiced concern about the size, noting that much of the surrounding uses are “very low scale” in height and mass.

“It seems inappropriate in this neighborhood, without some gesture to bring it into scale with what’s there today. I’m concerned about Popeyes,” he said.

Ms. Escarra defended the 16 Allapattah project, describing how the neighborhood is evolving, including a large mixed-use project approved by the city as a Special Area Plan.

5 Responses to Board gives thumbs-up to colorful Allapattah project