Advertisement
The Newspaper for the Future of Miami
Connect with us:
Front Page » Real Estate » Sliver of Brickell that held Babylon can have 24-story tower

Sliver of Brickell that held Babylon can have 24-story tower 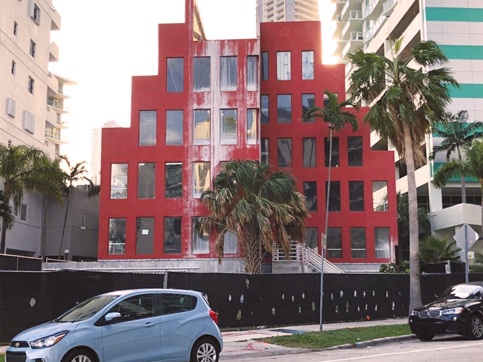 Miami commissioners have allowed owners of a Brickell area property that was previously limited to eight stories to build up to 24, despite Chairman Ken Russell and nearly all of about 30 nearby residents, who pleaded to bar what they saw as a more-than-generous rezoning.

However, the rest of the commission voted last week for the zoning change for Babylon International, whose property is at 240 SE 14th St. where the Babylon building once stood.

Planning Director Francisco Garcia had said that a zoning designation that would have allowed the building to reach up to 20 stories would have sufficed, with his department suggesting a denial of the 24-floor zoning.

But the Planning, Zoning and Appeals Board recommended approval by a 6-3 vote of the 24-floor zoning designation, with a limitation against the property using a bonus that would enable the property to be built beyond 24 stories.

The case deals with a scrivener’s error related to land usage that had to be corrected – the property had been designated as restricted commercial but will now have an open designation.

The commission was also left to determine what zoning corresponded to the building under Miami 21, the city’s current zoning laws that took effect in 2010.

During a public comment period, nearby residents argued against allowing the owners to build a building of 24 stories because it would affect their quality of life and because many had purchased nearby housing under the impression that the buildings in the area would remain relatively small.

But some residents took umbrage with commissioners Manolo Reyes and Joe Carollo for accepting campaign donations from those involved with the Babylon project, including one zealous presentation by a resident, which Mr. Russell said might have done more harm than good.

Both Mr. Reyes and Mr. Carollo said that such donations did not influence their position on the issue, with Mr. Carollo saying that the donation amount was a “drop in the bucket” and Mr. Reyes saying that people were projecting on him what they themselves are.

“I’m going to tell you this, and I said it a little while ago: you don’t have money and nobody has money here to sway my vote,” Mr. Reyes said to someone who he said insinuated his vote had been influenced by donors.

Mr. Russell, who voiced the concerns of many of the residents, argued to the rest of the commission that rather than rezoning the property to T6-24B-O, which allows for up to 24-story construction on the site, the board should instead designate it as a T6-12-O with a bonus, allowing for up to 20 stories.

He said that such a decision would also yield about $740,000 for the city that would go to the affordable housing trust fund, green space and infrastructure.

But when Mr. Russell made a motion for his proposition, no other commissioner seconded it. Likewise, none of the commissioners responded to his mention of tabling the item for the next commission meeting.

“I think we’re making a mistake here. I think we’re doing a giveaway where it’s not justified and I don’t believe we have the wherewithal to do it, and it should not be done emotionally,” Mr. Russell said.

He added, “We’re not restoring their rights; we’re giving them more than what they had before and without reason. We’re setting a precedent that’s going to damage a neighborhood in my district.”

Commissioner Keon Hardemon, however, did not see his motion as a corrective, arguing that it would put more limitations on the property owners for what had been a mistake from the city.

“The way that I see is that we’re asking them to give us something for something we already took from them,” Mr. Hardemon said.

Mr. Russell then took Mr. Garcia to task as to whether designating the Babylon as a T6-12 would be a sufficient corrective. Mr. Garcia said that the T6-12-O designation was sufficient.

Melissa Tapanes, who served as the attorney for Babylon, said that if the building was designated a T6-12, it would limit the building to seven stories.

Edward Martos, who represented the nearby Emerald building, said that under the former zoning laws, the Babylon was not entitled to build so high because of its small lot. He also added that nearly 800 residents had signed a petition against the 24-story rezoning.

“Under 11,000, there was a cap on your height based on the size of your lot. If you weren’t 20,000 square feet in size, you’d never go up above seven stories,” Mr. Martos said. “You’d never get over your seventh floor, and this site is 15,000 square feet in area, approximately. So, even the suggestion that they lost something that they had is bogus.”

As discussion dragged on, Mr. Russell’s arguments failed to sway the commission. Ultimately, others sided with Mr. Carollo’s motion, with everyone voting as they did during the preliminary vote in June.

Mr. Garcia told Miami Today that the commission’s decision might set precedent in future cases of surrounding properties but he doesn’t believe it will have immediate ramifications because the other buildings are in better shape and have residential condominium apartments.

The Babylon building was the first commercial building in Miami by the now-world-renown, Miami-based architectural firm Arquitectonica. The firm is behind the AmericanAirlines Arena and the Brickell City Centre, among many other structures.

The commission voted in 2018 against historically protecting the Babylon.