Advertisement
The Newspaper for the Future of Miami
Connect with us:
Front Page » Communities » Next Generation brings youth to Miami Beach government 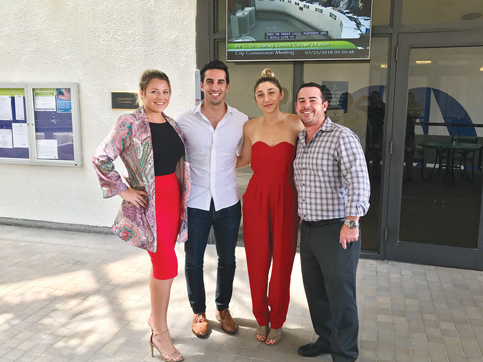 The voices of Miami Beach’s youngest generations are now loudly heard thanks to the city’s Next Generation Council. Miami Beach residents from 18 to 36 created their own way to participate in local government and represent the needs and ideas of the city’s next generation.

A well-rounded group of women and men from all types of professions work together and meet quarterly at City Hall to decide on motions that they send directly to the city commission.

“Noise ordinances, business practices, various opinions on tally on our agenda,” said Jordan Kramer, 30, co-chair of the Miami Beach Chamber of Commerce’s Millennial Action Council that in collaboration with the City of Miami Beach created the Next Generation Council last September.

The Next Generation Council acts as an advisory board to the city and provides recommendations to the mayor and commission on issues such as transportation and development regulations. They are honing on in three primary target areas: development and housing, infrastructure and mobility, and culture and arts.

“There were a few instances where our motions came before the city commission regarding changes in zoning ordinances,” Mr. Kramer said. “Most recently, we made a motion to agree with the city commission’s recommendation to expand the number of the micro [housing] units currently allowed in North Beach.”

Chaired by Daniel Smith, 31, a lawyer who lives in South Beach, the 11 members of the council work and meet frequently in subcommittees for each of its major three areas of interest.

“There was an application process that each member had to complete, and then city commissioners nominated the lead,” said Mr. Kramer, who is among the members of the council. The members are entrepreneurs and business owners, attorneys, doctors, architects, people who work in real estate both on the broker side and development side. “It’s kind of all across the board, said Mr. Kramer, who works for a real estate technology company, Compass.

In terms of development in housing, the council is trying to create a broader research presentation on affordable housing incentives.

“We are looking into what we can do to make affordable and attainable housing happen and occur in Miami Beach,” Mr. Kramer said. “It’s much needed in Miami Beach and it’s been a serious problem across the board in every metropolitan area, so it is something that we’re particularly focused on in that regard.”

The council is also looking at low-impact development, specifically at options that are not only beneficial for the future of Miami Beach but also sustainable and resilient to the changing climate and environmental conditions that Miami Beach is going to have to face in the future.

In terms of infrastructure mobility, their efforts are concentrated in helping accommodate and plan for the future of transportation. “We are looking at things like ride-sharing programs and ride-sharing platforms in order to better adapt Miami Beach to not only accommodate but handle these better moving forward,” Mr. Kramer said.

The council is examining ride-share drop-offs and pick-up points, but nothing is firm yet. Members are also finding ways to utilize or invigorate city assets across the Beach to better involve and utilize them.

Arts and culture in Miami Beach are also among their key areas of interest, giving special attention to the branding of Miami Beach.

Culture and art may be already present, but for the Next Generation Council their promotion is a matter of communication to the rest of the world so that the rich cultural experience is enjoyed by tourists and residents alike.

The date of the next whole council meeting is not yet set but, as every meeting, it will open to the public. All ages are welcome, Mr. Kramer said.

“Even though we’re a Next Generation Council we’re here to provide another idea to the city, and so our meetings are really meant to be open to everyone and we encourage people to come and lend their thoughts and ideas and opinions.”