Advertisement
The Newspaper for the Future of Miami
Connect with us:
Front Page » Top Stories » Miami-Dade tightens standards on CNG buses gas leaks 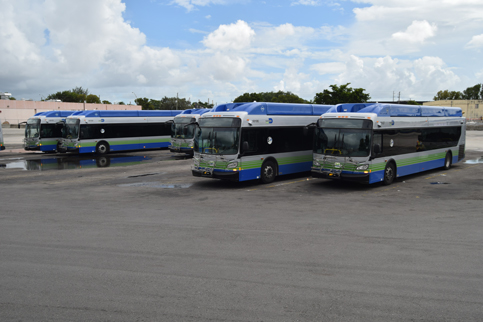 Perhaps it was Jeffrey Mitchell’s reference to the gas explosion at a Plantation shopping plaza this month that convinced Miami-Dade lawmakers to delay plans to buy more compressed natural gas (CNG) buses.

Maybe it was his and fellow transit union leader Joseph D’Elia’s assertion that one of the two manufacturers set to fill the 140-bus order, New Flyer of America, was bringing the county vehicles rife with problems.

The New Flyer buses, bought for millions to replace the county’s aged diesel fleet, arrive unready to roll once here, resulting in more 200 missed service hours, Mr. De’Elia said. Doors open while buses are in motion despite fail-safes there to prevent such malfunctions, Mr. Mitchell said.

But what should be most alarming, he told county commissioners July 10, was that the new buses were leaking fuel while in service – a problem the county transportation department was not only aware of but had codified it into its maintenance practices.

“They actually have a standard operating procedure that was developed by management to put these buses out there knowing that they are leaking compressed natural gas,” Mr. Mitchell said, holding papers presumably showing those procedures up for commissioners to see. “If someone’s standing at a bus stop smoking a cigarette, I hate to tell you what’s going to happen.”

In a July 15 letter to Mayor Carlos Giménez, Commissioner Daniella Levine Cava said she wanted answers, including records of repairs and reports of leaking gas or fuel lines.

“The allegation was serious enough that the mayor needs to be on-record as to what’s going on,” Ms. Levine Cava said. “They say the buses are safe, [as does] the company, [but] we’d like to see the records so we can assure ourselves.”

The mayor responded a day later, writing in a report that he’d directed county staff to “issue an invitation to bid immediately” for a follow-up mixed delivery of buses from New Flyer and manufacturer Gillig.

The union men’s claims, he said, were “inflammatory” and “recklessly insinuated.”

Of 272 New Flyer buses delivered, 265 have been accepted for service, the report showed. Thirty-one of those buses were out of service as of July 11 for various repairs.

“No bus is ever released for service in a dangerous or unsafe condition,” the mayor wrote, adding that CNG “has very narrow flammability limits” and is less volatile than gasoline, partly because its ignition temperature is about double that of traditional fuel.

Buses found to be leaking CNG could still enter service, it said, as long as they were “within allowable tolerance” leakage levels of 10,000 parts per million – or twice the levels recommended federally.

“When a fuel leak is verified on a [CNG] vehicle… by a reading of 5,000 parts per million, [the] condition is deemed hazardous and the vehicle is declared out-of-service,” the Federal Motor Carrier Safety Administration wrote in a July 2015 guide on detecting leaks in natural gas and propane commercial motor vehicle.

If vehicles are found to have leaks in excess of those levels, safety administration personnel wrote, they should not be permitted to drive more than 25 miles to a repair facility and must not be moved or parked indoors unless otherwise approved.

Twenty-five percent of the lower flammable limit for natural gas, then, is 12,500 parts per million. But to be conservative, the federal administration recommends using 5,000 parts per million as the maximum threshold definition of a leak, as it’s high enough to protect against false positive readings but low enough to ensure a vehicle with a fuel leak is removed from service before gas has accumulated to a hazardous level.

“We need more information to conclude what the acceptable standard is,” she said. “We’ll have an answer on this shortly, and if a change is necessary, we’ll make it.”

She told Miami Today on Tuesday that, following the research, her department will reduce the upper leakage threshold to 5,000 parts per million to be in keeping with federal standards.

“No reason to take any chances,” she said. “We’re actually adopting a standard similar to what Los Angeles uses – that basically any leaks detected will be addressed.”

Ms. Bravo said that despite what’s written on the operating procedures Mr. Mitchell referenced, Assistant Bus Services Director Derrick Gordon had told her that the zero-tolerance policy for leaks that the county is officially adopting has been in practice all along.

“[He] had been enforcing a policy to address any leaks that were found,” she said. “But we’re going to formally change the [standard operating procedure] to match what we’re doing.”