Advertisement
The Newspaper for the Future of Miami
Connect with us:
Front Page » Profile » Jason Spiegel: Driving Freebee local transit into many communities 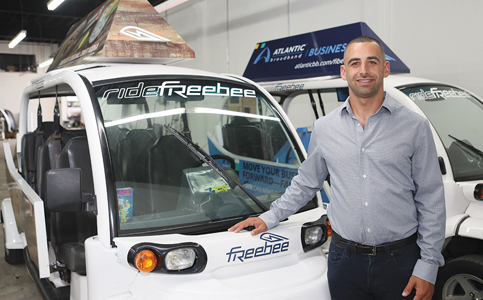 When Jason Spiegel launched Freebee with co-founder Kris Kimball in February 2012, the free on-demand ride-hailing service’s business model was markedly different than it is today.

As he tells it, Freebee essentially began as an ad agency disguised as a transportation company, its small fleet of electric golf-cart-like vehicles, wrapped in ads from Fortune 500 sponsors like Coca-Cola, T-Mobile and Jack Daniel’s, transporting riders short distances on South Beach byways.

The ad revenue, combined with a bare-bones business model in which drivers worked solely for tips and riders flagged down vehicles on-sight, helped Freebee stay afloat, albeit at a loss. That all changed in 2016, following the company’s development of Ride Freebee, an app similar to those used by ridershares Uber and Lyft that enables customers to order door-to-door trips on mobile devices.

“Freebee became a reliable way to travel around, where before… it was more of a novelty,” said Mr. Spiegel, managing partner of Freebee. “When the app came out, there was a way to call Freebee.”

Municipalities throughout Miami-Dade soon came knocking, inquiring how to get the Miami-born service onto their streets.

One major obstacle stood in the way: Freebee’s ad-reliant revenue stream wouldn’t work everywhere. The solution, he said, was for cities to fund Freebee similar to public transportation.

Key Biscayne was the first to do so, giving Freebee a one-year pilot program that year to test its efficacy.

“We knocked it out of the park,” he said. “From there, our business model changed. We went from making our money through advertising to being subsidized through municipal-funded tax dollars.”

Outside the county, Freebee runs routes in Fort Lauderdale in Broward County and Islamorada in Monroe County, with services to hit a fourth county – Palm Beach – in September.

In February, the company will serve as the official green transportation mode of Super Bowl LIV.

Mr. Spiegel confirmed that Freebee has yet to take on an investor, though he’s not averse to the idea if circumstances dictate.

“I would consider doing so based on the speed at which we need to go,” he said. “We’ve been lucky enough and have shown good enough profits that we’ve been able to get bank financing and debt, which has allowed us to continue to grow.

“If we can continue down that route, great, because we’re preserving our equity and building our value to where we want it to be rather than having to take equity because we need it to grow.”

One Response to Jason Spiegel: Driving Freebee local transit into many communities