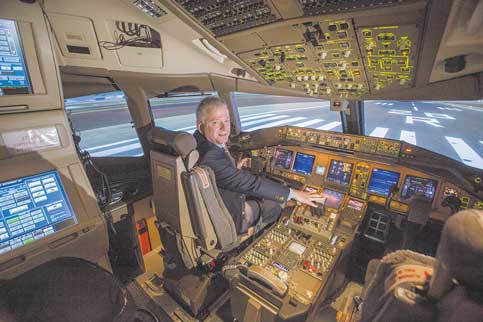 An undisclosed flight training center already operating in Miami-Dade County plans to lease 83,000 square feet in Sweetwater and add ten flight simulators at a total cost of more than $104 million – almost $100 million for the simulators alone – in an operation that would add 73 jobs in the county.

The Beacon Council has recommended to the county commission for action this week that the county offer the company $58,400 in tax refund incentives for creating the new jobs. The state, through Enterprise Florida, the state’s economic development organization, would chip in four times that amount, for a total incentive of $292,000 – $4,000 per job. Enterprise Florida endorsed the local incentive,

The company – code-named Confidential Project Prime – would get all of the tax incentives only after the jobs had been created at the stated salary levels and had existed for six years.

Such incentives for corporate locations and expansions are both widely given across the nation and widely decried as corporate welfare. Economic development organizations frequently say they don’t like the incentives but would lose jobs and capital investments to others if they didn’t compete in the incentives battle.

The company in question already has an operation in Miami-Dade with 173 jobs. Paperwork to county commissioners noted the retention of those jobs as one benefit of an incentive approval.

If approved, the company anticipates receiving incentive awards beginning in fiscal year 2022-23. Normal awards under the program are $3,000; the award in this case would add a $1,000 bonus per job because the average wage is pledge at more than 150% of the county’s average. Jobs would be created over a three-year period.

The package went to the county commission this week without a committee review. The commission does not generally reveal the name of the applicant at the time of a vote on incentives, nor is there normally a public report later by either county government or the Beacon Council on whether Miami-Dade landed the new jobs or who the applicant was.

If the awarded is granted, the real property development in renovation or build-out is listed at $4,335,000, which would generate $385,853 in county property taxes over the six-year tax incentive period.

Multiple flight training centers around Miami International Airport bring thousands of pilots, mechanics and engineers to the area every month, airline officials say, with a local economic impact of millions of dollars.

“Our customers like Miami,” Mr. Schaaf said. “It’s convenient to get anywhere in the world from MIA, especially for our Latin and South American customers. And we got a lot of great support from the Beacon Council.”

In addition to pilots, Boeing trains mechanics and engineers on composite repair and the maintenance of new models, he said. Boeing had anticipated the Miami training center would serve 3,500 to 5,000 customers annually, Mr. Schaaf said, but it was bringing in 10,000 to 12,000 a year, accounting for upwards of 80,000 hotel room-nights each year.

Airbus, a multinational manufacturer of civil aircraft headquartered in Toulouse, France, opened its only US training center on Northwest 36th Street some years ago to serve customers from all over the Americas.