Advertisement
The Newspaper for the Future of Miami
Connect with us:
Front Page » Real Estate » New 50-story Brickell tower to be mostly offices 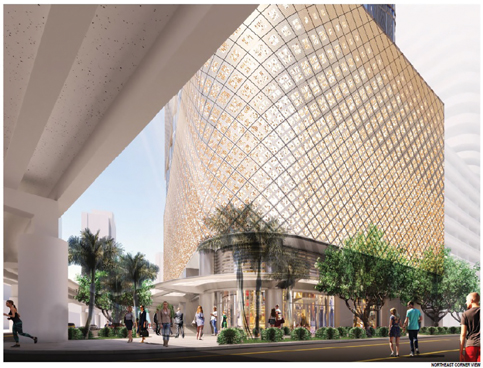 A developer plans a gleaming skyscraper rising 50 stories in the heart of Brickell.

The city’s Urban Development Review Board on June 19 recommended approval, with a couple of suggestions.

Attorney Carlos Lago represented the developer and said the tower will have a rooftop level restaurant with unparalleled views.

On an application form, Mr. Lago wrote: “The mixed-use project infills the last remaining parcel on the urban corner of 8th Street and Brickell Plaza Drive (SE 1st Avenue). Primarily an office building, the project has activated frontages on both streets with lobby and retail focused to the corner.

“An artistic façade of perforated panels creates a kinetic aesthetic on the parking façade. The tower distinguishes itself from the pedestal with a curtain wall façade of silver glass on the main façades and a copper toned frit adjacent to the major architectural feature.

“These feature elements create a dramatic cantilever on the west façade and frame the building vertically before turning horizontal and creating an outdoor room for the restaurant,” he wrote.

In a letter of intent, Mr. Lago said the property is in the heart of the Brickell neighborhood, which has become the city’s financial and business district and has experienced rapid population expansion.

Pursuant to the city’s Future Land Use Map, the site has a land use designation of Restricted Commercial and is within the Urban Central Business District, he said.

“The Property is surrounded by various multi-family residential, hotel, office, and commercial uses, including the Brickell City Centre [Special Area Plan] mixed-use project to the north and the SLS Lux Brickell project to the west,” wrote Mr. Lago.

Mr. Lago told the review board that the tower will be served by transit options, being near the Metromover, and just a few blocks from the Metrorail and bus and trolley routes.

Keith Kulynych of Revuelta Architecture International went through some details of the site plan and elevation drawings for the board.

He said the company is very excited to be working on the project, but noted the odd shaped site is very challenging.

The building is designed with one underground level for parking and a sky lobby on the 30th floor.

The upper levels of parking in the pedestal will have a metal façade for screening, made up of a series of small moving panels, said Mr. Kulynych.

There was a moving image of the screening. “When the wind blows it creates this movement on the façade,” he explained.

He showed images of the two-story commercial space at the top, where a restaurant is envisioned. The tower also includes exercise and gym space.

“I want to commend the applicant on a very beautiful building,” said board member Robert Behar. “Very impressive – great views,” he added.

Board member Ignacio Permuy commended the design team for an excellent job. “It will be great for this area,” he said.

Dean Lewis also commended the developer’s team, saying “this will be a great positive addition to the skyline.”

His only concern, he said, was it appeared the west façade is “a disconnect” when compared with the rest of the tower.

As part of the motion to recommend approval, the board suggested the developer consider ways to make the west elevation more compatible with the rest of the building, and consider the impact of the “movable” metal panels on the garage on days when there is no wind.

The developer is requesting several waivers, including:

■Permission to increase the permitted lot coverage from 80% to 88%.

■To permit up to a 30% parking reduction for properties near public transit.

■To permit, along a primary frontage, above ground parking to extend into the second layer along the frontage, if an art, glass, or architectural treatment of a design approved by the planning director, with the recommendation of the review board, is provided.

■To permit, along a secondary frontage, above ground parking to extend into the second layer.

■To permit up to a 10% reduction in the drive aisle width.