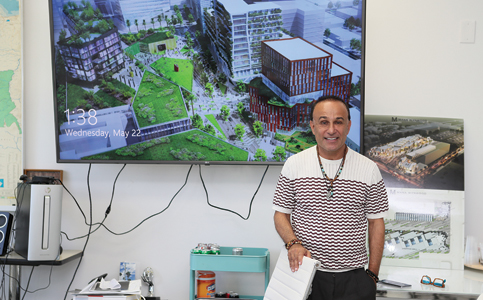 Moishe Mana has high hopes for Miami. The self-made billionaire businessman and real estate developer envisions the city and its surrounding areas as the future commerce connector between the Americas and the Far East, a collaborative hub linking like-minded creative leaders in an array of industries, from art, entertainment and fashion to technology, medicine and higher education.

He plans to realize that vision through two massive, ambitious local projects – Mana Wynwood, a business and art complex in the heart of the booming Miami neighborhood; and Mana Common, a collocation work and residential project that in Miami will span more than 45 buildings and over 5,000 planned micro-housing units – as well as scores of other peripheral and direct initiatives.

“I’m not a traditional developer,” Mr. Mana said. “I’m much more of a content developer, and I use the buildings to suit the purpose. We’ve already invested in 72 companies, technology here, and we intend to expand it and create a movement through what’s coming to Miami, what we’ll be building [in Wynwood] and downtown.”

Now after years of anticipation, he said, the ideas and values guiding those projects have been distilled and are poised to be put into action.

“We know what we want to do, what the mission is,” he said. “The philosophy is concluded, more or less. We know who the players are going to be. We are now filing with the city and county for the construction that we need to do.”