Advertisement
The Newspaper for the Future of Miami
Connect with us:
Front Page » Real Estate » Related Group’s plan for Terminal Island tower sails ahead 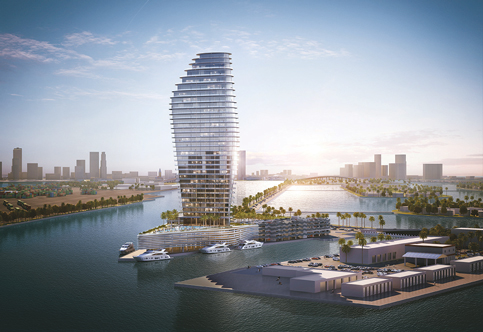 Miami Beach commissioners have asked their Land Use and Development Committee to consider altering land use and zoning on Terminal Island for residential use. Related Group is behind the request – it deems property on the island ideal for a 90-unit condominium.

Related aims to win land use and zoning OKs to build One Island Park. The 90-unit residential tower would exceed 400 feet and offer 360-degree views with little obstruction.

Residents would have the Fisher Island ferry across from them, a Florida Power & Light substation adjacent to the ferry, the city’s Fleet Management facility next to the Related site, and another piece of land where Fisher Island plans to build a new ferry terminal. Across the water from One Island Park, accessible by a bridge, is the US Coast Guard.

Related is working to ensure that One Island Park will become the only residential component on Terminal Island. Vice President Jon Paul Pérez said, “It will be the only residential building because in order for us to get the amount of square footage that we need we are using square footage from the Miami Beach sanitation facility next to us and we are also purchasing air rights from the FPL station next to the city’s facility. We are taking all of those air rights and combining it with our property in order to build the size of the project.”

Europeans, Latin Americans, and Northeasterners would probably comprise the buyer pool, with a third of them expected to reside year-round and two-thirds occupying condos seasonally.

Related promises to replace the city’s current Fleet Management facility on the island, with the oldest building dating back to 1945, in exchange for the city’s approval of the condo. The new facility would offer 50,000 square feet of administrative offices for fleet management, sanitation, police and warehouse space, an upgraded fuel station and parking garage with 400 new spaces. The new parking spaces could consolidate all employee parking in one location, said City Manager Jimmy Morales.

“If we are going to ask for zoning changes, we should be giving back to the city,” Mr. Pérez said.

One Island Park is expected to contribute over $2.9 million per year to the city’s tax revenue. The revenue stands in sharp contrast to the $10,500 tax revenue that the parcel currently generates annually.

Related Group Chairman and Chief Executive Officer Jorge M. Pérez says the alternative to a condo would be a four-story office measuring about 40 feet in height. The office would span 150,000 square feet and attract about 450 users to the site daily. The latter option is estimated to cause serious traffic concerns on the MacArthur Causeway.

Mayor Dan Gelber said his metric for approving the project will be based on the public benefit and low traffic estimations with One Island Park: “I realize it is a lot of revenue but, more importantly, it has the potential to give us a public benefit that can excite our public manager and at the same time provide a template for intensity that is much lower than it is right now, which in the long run I think would benefit the residents.”

Not everyone is on board. Commissioner Michael Góngora, for one, wants a reduction in the condo’s height.

The Coast Guard also has concerns, changing its stance on the project after issuing to the city in 2014 a letter of no objection.

As is, Related plans to add a covenant on the land prohibiting unit owners from suing the Coast Guard and acknowledging the decision to purchase property beside the federal agency.

The positioning of One Island Park also changed due to Coast Guard concerns. Related’s vice president Mr. Pérez said, “So before, imagine a rectangle, the long part of the rectangle, was facing the Coast Guard. Now, that rectangle has been turned, and you only have one line of units that is looking at the Coast Guard.”

Office space, additional surveillance on top of One Island Park, and parking is also on the table for the Coast Guard to take.

“We are trying to be a good neighbor and alleviate their concerns in any way that we can,” Jon Paul Perez said. “We do think at the end of the day we will get back to that no-objection letter.”

Commissioner John Elizabeth Alemán frowned upon the developer’s decision to not alleviate the Coast Guard’s remaining concerns first and consider further land use and traffic issues near the site before asking for the referral. She said, “Supporting the referral does not guarantee my support for the project as we move forward. That has to be earned.”

Miami Today did not receive a comment from the Coast Guard in time for publication.

Related must pass through the land use and development committee before returning twice to commissioners for a vote on the development agreement and tax amendments. The attention will then focus on the design of the project, meeting expectations set by the design review board, and obtaining the necessary permits. The immediate next step, a meeting with the Land Use and Development Committee, is scheduled for July.