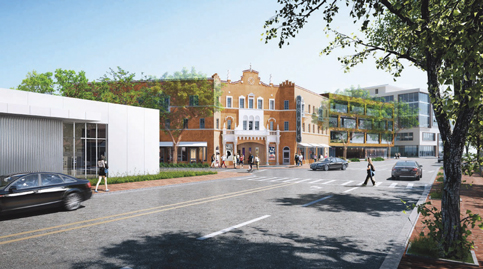 As officials with the Miami Parking Authority ponder another potentially long delay in the plan to redevelop the Coconut Grove Playhouse property and build a companion municipal garage, they are turning to higher powers when searching for parking solutions for the Grove.

The city’s parking agency is controlled by the Off-Street Parking Board.

At the board’s June 5 meeting, Authority CEO Art Noriega spoke of the critical need for additional parking in the Grove, and said he’d met with US Rep. Donna Shalala to explore building a garage on federal property; adjacent to the Grove’s post office, at Grand Avenue and McDonald Street, hugging the western edge of the village’s downtown area.

His comments were made as he updated the board of the status of Miami-Dade County’s plan for the playhouse property.

He said Ms. Shalala is “very proactive for us – she’s already reached out” looking for the right mechanism for redevelopment opportunities that could bring more parking spaces to the Grove.

Board member Jami Reyes said the parking agency might get a new parking facility next to the post office before the playhouse garage is built.

Mr. Noriega said Ms. Reyes’ comment came with a bit of sarcasm, adding “it could be true” but not likely.

Ms. Reyes reminded the board and the staff they have been getting calls from frustrated restaurant owners in the Grove who have been pleading for more parking.

Mr. Noriega expressed fresh frustrations with the latest roadblocks to the county’s playhouse plan, which involves the parking authority as a partner in building and operating a garage lined with retail uses.

He updated the board on the status of the county’s plan, which is basically in a holding pattern until the county files an expected lawsuit.

The state owns the theater and has leased it to the county and Florida International University. The lease calls for site restoration and a new modern theater to be run by GableStage.

The county’s plan would restore the front of the theater, demolish the larger auditorium and build a new 300-seat theater.

Opponents continue to fight for restoration of the entire structure including the 1,000-seat auditorium, a desire shared by Mayor Francis Suarez.

The county garnered approval of its plan May 8 on a 3 to 2 vote by the city commission, but saw its hopes dashed May 17 when Mayor Suarez vetoed the approval, and then on May 23 the commission failed to override the veto.

County officials vow to continue the fight, which is expected to mean a lawsuit against the city.

He told the parking board, internally he wants to wrap up a request for proposals for the parking garage component and complete paperwork with the project architect Arquitectonica.

The county’s appeal of the mayor’s veto will dictate how the project goes forward, but he wants the authority’s part of the deal locked in and ready to go, he said.

Mr. Noriega said it’s possible the county, FIU and the parking authority are being forced back to square one and have to “reboot the whole thing.”

In the meantime, that end of the Grove begs for more public parking.

“I want all our pieces in line. We need to be prepared to move fast on our piece of it,” Mr. Noriega said, noting he wants to stay out of the politics of the controversial matter.

But he said the authority’s main allegiance is to the City of Miami and not the county, and it’s important to keep that in mind as well.

He stressed the importance of the planned garage next door to the playhouse.

“The parking component is critical to the Grove… but we can’t move forward right now,” he said. “We’re stuck in neutral, six months or maybe longer.”

A board member asked about projected costs of the garage portion of the project.

Mr. Noriega said the authority’s part has an estimated cost of $29 million. He said $6 million of the money the agency got from the sale of the Oak Avenue garage, coupled with $3 million from the Coconut Grove Business Improvement District, would cover about $9 million. The remaining $20 million would be financed via borrowing using bonds.