Advertisement
The Newspaper for the Future of Miami
Connect with us:
Front Page » Transportation » Virgin Trains USA starts building rail line to Orlando

Written by Jesse Scheckner on May 21, 2019
Advertisement 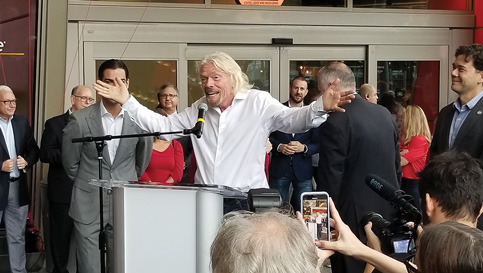 The “Phase 2” expansion, which the company formerly known as Brightline said in statement will be completed and in service by 2022, represents a total private investment of $4 billion.

“Connecting Central and South Florida will bring thousands of jobs today and by modernizing infrastructure, we will strengthen Florida’s economy for decades,” Virgin Trains President Patrick Goddard said in a prepared statement, calling the contractors “a world-class construction team.”

“Phase 2” consists of four zones, the company said. Hubbard, Wharton-Smith and Middlesex began construction Tuesday on the first two zones, which encompass the 3.5-mile rail section and maintenance facility at the airport.

Construction on Zones Three and Four “is imminent,” the company said, and includes laying 490,000 ties, driving 2 million spikes and bolts, and transporting 2.35 million tons of granite and limestone by 20,000 railcars.

For Zone Three, which runs roughly 35 miles following the Highway 528 corridor between Orlando International and Cocoa, Virgin contracted with Granite for roughly:

For Zone Four, which will upgrade 129 miles of existing tracks from Class IV to Class VI to allow for service speeds of up to 110 miles per hour, Virgin contracted with HSR Constructors to:

■Install about 40 new turnouts and crossovers and relocate another 40.

The undertaking will generate over 10,000 construction jobs, $2.4 billion in labor income, $6.4 billion in direct economic impact to Florida and $653 million in federal, state and local tax revenue, the company said.

“Miami to Orlando is the ultimate type of corridor that Virgin Trains USA wishes to build,” said Ben Porritt, senior vice president of corporate affairs for Virgin Trains, when asked how critical to Virgin Trains’ solvency the link between South and Central Florida is. “Connecting city pairs that are too close to fly and too far to drive is what defines our business model.”