Advertisement
The Newspaper for the Future of Miami
Connect with us:
Front Page » Communities » Roads area due Tru Hilton hotel geared to younger guests 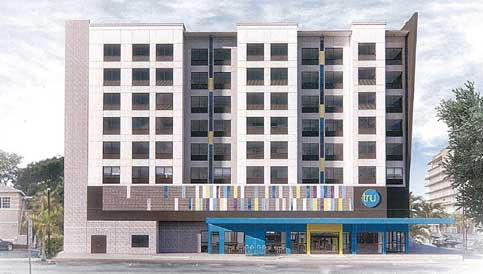 A new hotel brand that targets younger travelers is planning a new location in The Roads neighborhood of Miami.

Benito Irastorza, president and chief executive officer of IRAS Group, is the owner-developer proposing a Tru Hotel by Hilton at 1931 SW Third Ave.
The selected-service hotel will rise eight stories and offer 141 rooms, have parking for about 73 vehicles, and have an exterior pool deck at the third level.

The city’s Urban Development Review Board on May 15 recommended approval of the project, with a few recommendations.

The property is currently vacant. It is a corner lot at Southwest Third Avenue and Southwest 20th Road.

The hotel will have a main lobby at the first level, parking on the first and second levels, and hotel rooms from the third to eighth floor.

The architectural firm working on the project is David L. Wallace & Associates P.A.

In a letter of intent to the board, Mr. Wallace addressed the parking waiver and plans for screening the parking spaces.

“Due to the site constraints, parking area has been extended into the Second Layer above the first story, via Waiver, to be able to reach the minimum number of parking spaces required by Miami 21 Zoning Code,” he wrote.

A perforated metal screen has been proposed, instead of a glass treatment, to cover up 100% of that portion of the pedestal façade, Mr. Wallace wrote. This screen is made up of 1.5 foot by 5 foot perforated metal panels attached to a metal frame, treated with the Tru brand colors that create a faded pattern on the façade along the second level.

“The intention is to extend the visual appearance of the surface and give it an individual expression, while concealing the parking area from the public,” he wrote.

Board member Dean Lewis said this is an important project for that corner site, and he called the overall massing “friendly,” but said some aspects of the design were predictable.

The building is to have a three-color scheme.

Mr. Lewis asked if it was a Tru brand color scheme, and a representative of the developer said yes, it’s part of the branding.

Mr. Lewis suggested a redesign to bring light into the area of the elevators: “If you open a slot here to the daylight, you’ll make it a more inviting access.”

Other members said the design didn’t include any special treatment to help the high profile corner stand out.

Board member Ignacio Permuy said the designers missed an opportunity to make the north elevation more pedestrian-friendly by adding some kind of retail or office use there.

Mr. Permuy asked what the idea was behind the Coral Way elevation (divided Third Avenue).

Tru by Hilton is a brand of hotels trademarked by Hilton Worldwide. The new brand was announced in January 2016 at the Americas Lodging Investment Summit in Los Angeles designed to compete against Comfort Inn and La Quinta.

Board member Fidel Perez said the first time he looked at the renderings and plans, he thought it looked like “an old building being renovated.” He didn’t like the color scheme either, which includes turquoise.

“The color scheme is a major issue,” said Mr. Perez.

Mr. Irastorza addressed the board, stating: “We have a brand concept here and there are certain requirements. We all have different tastes… We have the brand we have to work with.”

Mr. Irastorza acknowledged the building has already been designed, and while he generally believes everything can be made better, “this is a tight site.”

He said initially the site was smaller and the plan called for an 80-room hotel and underground parking, but they were able to purchase an adjacent lot and expand the project’s scope.

Mr. Irastorza said the design had already been submitted to the city, and to go back to square one on the design is “not feasible.”

Mr. Lewis responded, “I appreciate your perspective and your pressures, but we have a job too.” He said the board was there in part to suggest how to improve the building.

Mr. Lewis said the owner-developer worked itself into a corner by proceeding with nearly finished drawings before getting all necessary review and approvals. He even suggested having the developer come back in a month, after considering the comments of the board.

Joseph Eisenberg, a city planner and liaison to the review board, said the board has only three options: approve; deny; approve with conditions.
The only way a project can be deferred is if the developer voluntarily agrees to a deferral, he said.

There was some disagreement over whether the board was limited to reviewing only the waiver involving the parking in the second layer and the planned screening to be used.

Mr. Lewis said he believes asking for the waiver triggers a more thorough review of the overall proposal, “the project as a whole.”

After more debate, the board voted to recommend approval of the project, with recommendations including: extending the elevator lobby to allow daylight in; improving the corner of the building; reconsidering use of black stucco material; and increase the glazing on the exterior of the lounge area.

Board members then asked staff to report on the outcome of all projects it reviews, including status reports showing how a project may have changed after review board recommendations to the planning director.