Advertisement
The Newspaper for the Future of Miami
Connect with us:
Front Page » Profile » Eddie Cora: Miami-Dade Fair and Exposition aims to add scholarships 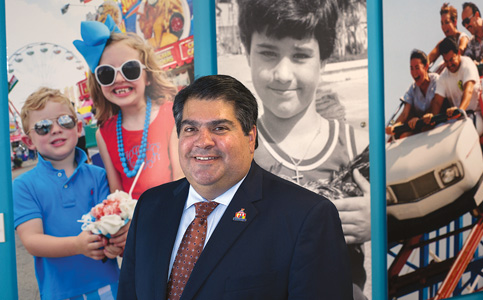 If you ask him, Eddie Cora will tell you the reason he’s president and CEO of the Miami-Dade County Fair and Exposition is because of a Unversity of Miami internship he did in the early ’90s hanging advertisements in the Orange Bowl.

That, he said, led to a job out of college with the Florida Marlins, where he worked with billionaire businessman Wayne Huizenga, the team’s co-owner, and Don Smiley, then the team’s president. The experience proved formative.

“Their level of acceptance was so high that I learned at an early age to set the bar high and strive for it,” he said. “Even if you fall short, you’re going to do a good job.”

After six years, he took a job with the Orange Bowl Committee, which in turn led to his joining the fair’s board of directors in 2000. At the same time – and until July last year – he worked in agriculture.

When the position of president and CEO of the most attended fair in the Southeast US became available last year, he said, his fellow board members asked him to take the job, citing his 18 years of service there. His agricultural background also helped, he added, as the fair is chartered as an agricultural fair in an urban community.

“I was intimately involved in the mission of this organization and fell in love with it, between its agricultural and educational component,” he said. “[Taking the job] was almost a no-brainer. I get to work at something I love.”

Mr. Cora sat down with Miami Today reporter Jesse Scheckner. The interview, recorded by Jahmoukie Dayle, can be found Friday at http://bit.ly/2UdTyGr.