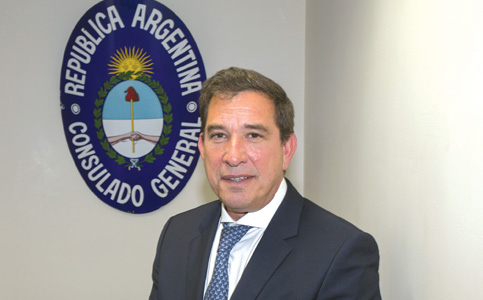 As consul general and director of the General Consulate and Promotion Center of the Argentine Republic in Miami, Leandro Fernández-Suárez serves and represents the world’s largest Spanish-speaking nation by area and its citizens in Florida, Puerto Rico, the Virgin Islands and the Bahamas.

A career diplomat and administrator with a lively, cordial disposition, Mr. Fernández-Suárez assumed his post in September after serving two years as Argentina’s director of South America, a job he took after a seven-year stint in Peru.

Being a good diplomat, he said, comes down to one key skill: the ability to connect with people.

“One of the most important parts of [the] job – and it doesn’t matter where you are posted – is to connect, to create bridges between Argentina, the country you are in and [its] people,” he said. “[That includes] not only working with the government or state but also civil society, [having] the opportunity to let them know more about Argentina [and] the opportunities it presents to the world.”

Mr. Fernández-Suárez sat down with Miami Today reporter Jesse Scheckner. The interview, recorded by Jahmoukie Dayle, can be found Friday at http://bit.ly/2UdTyGr.