Advertisement
The Newspaper for the Future of Miami
Connect with us:
Front Page » Communities » 250 apartments planned at edge of Health District in Miami

250 apartments planned at edge of Health District in Miami 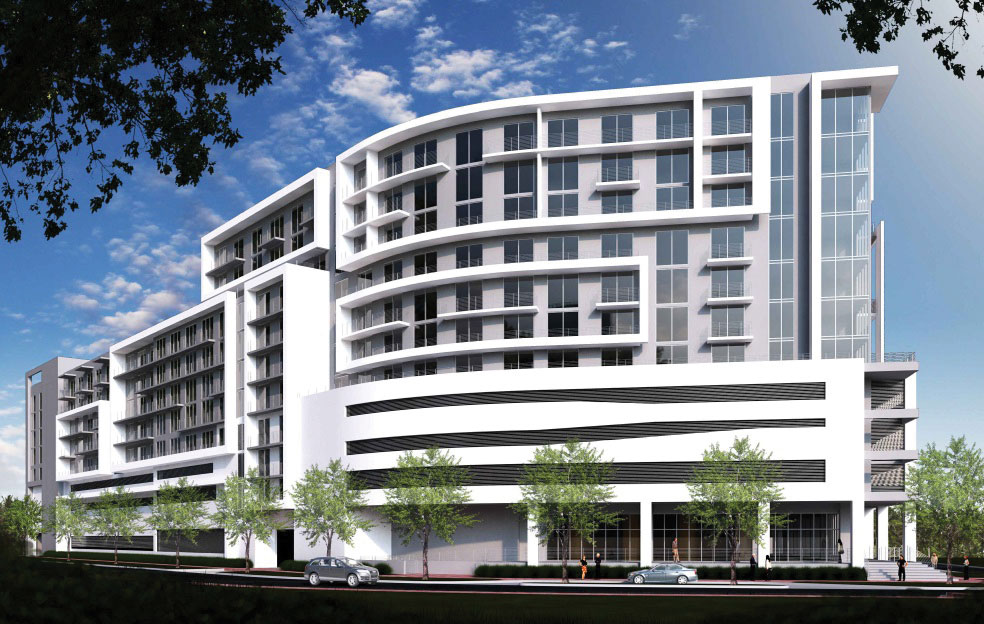 A developer plans to build up to 250 apartments at the edge of the Health District in Miami, just south of the Dolphin Expressway.

The city’s Urban Development Review Board granted conditional approval of the project Feb. 20.

To be called Soleste Uptown, the project is to include 3,080 square feet of offices and up to 394 parking spaces.

The residential units will include studios, one-, two- and three-bedroom apartments.

Iris Escarra, an attorney representing the developer, discussed details of the planned building and introduced Ivo Fernandez, architect consultant on the project.

“The Property is located at the intersection of the Health District (formerly known as Civic Center) and the Overtown neighborhood of the City of Miami… areas which continue to experience rapid population growth and business expansion,” she wrote.

The irregularly shaped site fronts Spring Garden Road to the south, Northwest 10th Avenue to the east, Sunnybrook Road to the north, and the State Road 836 (Dolphin) Expressway to the west.

The site has a land use designation of Restricted Commercial. The property is surrounded by multi-family residential, office, and commercial uses.

Ms. Escarra said the project will provide additional housing options within walking distance of one of the city’s most important employment and entertainment centers.

“The Health District is home to the City’s principal health care, research, non-profit, educational and judicial institutions. This area is in great need of additional housing options to serve the thousands of individuals who work in the area,” she wrote.

Soleste Uptown will provide spacious sidewalks and an arcade that will enhance the pedestrian experience in the area and give this long-neglected neighborhood a true sense of community, she said.

Additionally, the project provides two fully activated cross-block passages. The first passage will be along the northwest property line and consist of an open area providing an inviting and serene environment with benches, lighting, landscaping, and other amenities including a dog park and providing a connection between Spring Garden Road and Sunnybrook Road, Ms. Escarra said.

Plus, the project will provide a 10-foot-wide cross-block passage through the proposed structure that also provides seating areas, lighting and landscaping.

The developer is requesting several waivers for the project, including:

■Allowing up to a 10% reduction in the access aisle width. The project proposes a drive aisle width of 22 feet, instead of the required 23 feet.

■Allowing above-ground parking to extend into the second layer along a primary frontage, if an art, glass, or architectural treatment of a design approved by the planning director, with the recommendation of the review board, is provided for 100% of that portion of the façade.

Mr. Fernandez told the board that interesting geometric patterns were employed in the design to create an architectural language and break up the façade.

Board member Ligia Labrada said she appreciates the interconnecting paths for pedestrians – the walkability of the project.

Board member Anthony Tzamtzis said it’s a difficult site and he commended the architect for a good job on the project.

He asked if the units would be rental, a point confirmed by Ms. Escarra.

“The developer’s team has done a very good job with this site,” said board member Ignacio Permuy. “The articulation between horizontal and vertical is very well done.”

Ms. Escarra said the building might be eight stories and not 11.

Mr. Marston suggested, if the building is to be only eight stories, to have the architect revisit the lines and façade “in order to add a strong articulation.”

As a condition of the board’s recommended approval for the 11-story proposal, member Willy Bermello asked that the designed metal screen façade be extended further. He also offered a condition that if the plan changes to an eight-story building, the developer will have to bring it back to the board for review.