Advertisement
The Newspaper for the Future of Miami
Connect with us:
Front Page » Profile » Elvis Dumervil: After pro football career, he builds rental realty empire 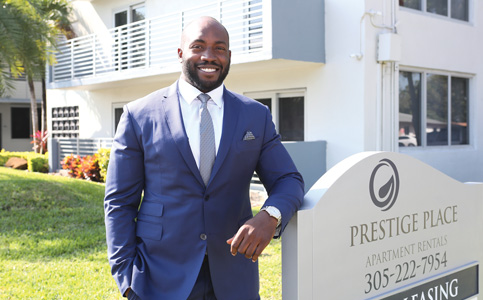 Elvis Dumervil sits in his office underneath a large sign designed to look like the railroad property in the Monopoly board game. At the bottom of the sign beneath the image of the iconic Monopoly train, it reads “Keep Pushing.”

That saying has been Mr. Dumervil’s personal motto from his upbringing in North Miami to a successful career playing 12 seasons as a defensive linebacker in the National Football League (NFL) with the Denver Broncos, Baltimore Ravens and San Francisco 49ers. He signed four multimillion-dollar contracts and credits a lot of his ability to deal well with different kinds of people and situations to his background in sports.

Although he originally wanted to be a CIA agent, Mr. Dumervil has now made a successful transition into the real estate market in Miami with his property management and investment firm, Prestige Estates. Mr. Dumervil is planning to expand by purchasing one to two buildings each year.

Although Mr. Dumervil currently lives in Coral Gables with his wife and children, he grew up in low-income neighborhoods as the youngest of four children of a single mother. He and his family moved around Miami living in various areas, including Liberty City, Little Haiti, North Miami and Opa-locka. His mother and father both emigrated from Haiti to Miami in their early 20s and he still has family there today.

Now, his firm’s headquarters is only a few streets over from one of the houses he lived in as a child. He remembers it clearly because the landlord wouldn’t fix the air conditioning for three months during the summer, even though his mother worked several jobs to always pay the rent on time.

After experiencing less-than-ideal living conditions as a kid, coming out of the NFL in 2015 and retiring after a successful football career, he decided to focus on buying and renovating apartment complexes in North Miami but keeping them affordable. His focus is not just on making money but on bringing immense value, comfortable living and job creation to the neighborhoods that raised him.

His firm recently completed the gutting and renovation of Prestige Waterfront, a two-story multifamily building in North Miami Beach, and it has another building that’s currently under contract.

All told, he has about 25 employees and 588 units between 11 buildings. His firm owns properties in Fort Lauderdale, North Miami and Oakland Park. His goal is to make North Miami into the New North, while keeping it affordable for the people who have lived there for generations.

His sales center is busy on the day of the interview, filled with both employees and clients looking to sign leases. Mr. Dumervil modernized his systems to make everything as easy as possible for both tenants and employees.

“We rebooted our whole branding, marketing, everything. We’re just trying to scale off our social media and attract the Millennials and just make things more efficient,” Mr. Dumervil said. “As you can see, there’s a lot of traffic here. We try to keep things as seamless as possible, and that way we can focus on work. We have portals online where you can email us work orders to make everybody’s job a little more efficient.”