Advertisement
The Newspaper for the Future of Miami
Connect with us:
Front Page » Opinion » A 1958 scrapbook illustrates today’s infrastructure gaps 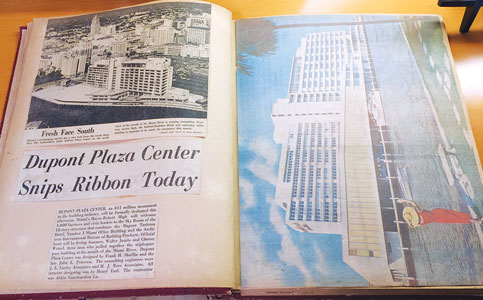 As Greater Miami’s population mushroomed over decades, we’ve had no shortage of developers building the places where we live and work. What we’ve been woefully short of is the pivotal public infrastructure that government must provide.

That Miami pattern of private advances with vital government contributions lagging far behind is not limited to any generation. It’s not spelled out in the history books, but it’s clear by reading between the lines.

I got my lesson over the holidays, from a scrapbook of illustrated newspaper clippings that was kindly dropped off at our office several years ago. It was assembled in the late 1950s by a to-me-unknown Miamian who focused on both development and the future. This person carefully pasted in reports of the time that chronicled every planned development in the region.

Those clippings as a group tell the story of opportunities for government to lead the region’s growth that were acted upon far too late – if at all.

The book carefully shows every planned hotel of size, including some that were never built. But enough were built – like the now-gone Dupont Plaza Hotel, the Diplomat and a string of others – to keep a tourist industry roaring.

Shown too were new office buildings, tiny by today’s standards but large for their time, including plans for the Ferré building downtown at 100 N Biscayne Blvd., all of 30 stories that would be the tallest in the state (yes, it’s there now, and newly refurbished).

Pages were devoted to just-revealed plans for a shopping center so far out in the hinterlands that it seemed crazy, but they did build it and called it Dadeland. It seems to have worked.

Residential buildings – they weren’t condos then – were also shown in profusion.

There was even an attraction for visitors, a new planetarium, to be built beside an equally new science museum. Both opened successfully across from Vizcaya just south of downtown, the site abandoned for our latest version of science museum and planetarium downtown.

Missing from all of those then-glittering projects are the same things that are missing from our glittering new projects of today: the supporting government infrastructure. Not a shred of new transportation, not the water-and-sewer work, not the parking, not even buildings to support government itself.

Well, there were indeed plans for a Miami City Hall downtown on Flagler Street. The land was there, the owners offered to build vast public spaces for the future of a growing city, but with the benefit of hindsight we know that it never happened.

Miami City Hall today is a tiny building in Coconut Grove that Pan American World Airways abandoned when it no longer needed it as a seaplane terminal. The city’s main offices are miles away on the Miami River in a structure built for Florida Power & Light that became surplus when FPL moved north to Juno Beach. Now the city is swapping that riverfront site to a developer that will eventually build offices for the city at a spot yet to be chosen – but not a proper city hall for a major city, just an office building.

Miami had the chance 60 years ago to make a statement with city hall, as the clippings show, but after the scrapbook was finished it chose not to.

Those clippings were assembled when everyone realized that Dade County was soon going to house 1 million people. By 1960 the official census was 935,047 – a third of today’s population.

Looking ahead back then, reporters began to predict what the county would be like when the population reached the million mark, which they estimated would be in 1965.

What they discovered was what we also feel: by the time privately funded growth occurs here, the government infrastructure for it is just being planned and might never show up at all.

Looking in 1958 into the crystal ball, reporter Leo Adde speculated in the Herald that a suburbanite in far-future 1965 Miami would be “up early – he has to be. It’s a long drive to downtown, to the new office building complex which grew up in the bayfront area off Flagler Street. Miami has developed as the state’s financial and banking center….

“The two-car family isn’t unusual in suburbia anymore,” he wrote. “Rapid long-haul transit hasn’t developed here as in other cities which planned early for such modern marvels as monorail…. The county allowed residential development right up to the boundaries of highway rights-of-way. No space was left for commuters’ parking lots.

“What good would a monorail line be if there was no place to leave the car once you reached it?” he wrote. “The experts say it was already too late in 1958, when the area realized its growth potential, to plan adequately for 1965 transportation.

“The driver noses his small car into the whizzing parade – ‘a holocaust of traffic,’ one expert called it. Twenty-five miles to go, and he’d be at work.”

Pretty good guesswork for what was going to happen – a future banking and financial center – and what was not going to happen, namely the transportation infrastructure to make life work. If you changed “monorail” to “Metrorail,” those paragraphs might be talking about Miami dilemma’s today.

Not that the reporter got it all right – he assumed that the wealthiest executives would live the farthest out from the center of the city, that all the workers who actually make a community function would live in comfort in affordable and plentiful multi-story apartment buildings much closer to downtown, and that the wealthiest Miamians would be retirees who would live in the areas even closer to downtown. He didn’t foresee the advent of condominiums or the youth movement around downtown or the influx of residents from other countries – he was writing, don’t forget, before the Cuban revolution and its aftermath here.

But he was spot-on about the failure to provide transportation that a growing community would need. Fourteen years after he wrote, county voters approved bond borrowing for the Metrorail that was needed in 1958. Today, we’re still trying to find enough money and willpower to build the rest of the rail transit we needed decades ago.

Looking beyond that clipping, an article by Jeanne Bellamy detailed gaps in other infrastructure that the growing Miami would need, including shortages in classrooms, hospital beds, water & sewer (we’re about $13 billion behind in that today because we did very little for many decades) and telephones (she couldn’t have foreseen that cellular would fill that gap many times over in decades ahead).

When we question today the need for government vision for the future, we can look back to this scrapbook and note that the planning and execution that government didn’t undertake 60 years ago was well spelled out in these faded newspaper articles.

The vision was there, but the execution wasn’t. We’re paying for it today, just as our grandchildren will pay if we let vital infrastructure wait today. Have we learned any lessons?