Advertisement
The Newspaper for the Future of Miami
Connect with us:
Front Page » Business & Finance » Miamians may get to test Ford Motor Co. autonomous cars

Miamians may get to test Ford Motor Co. autonomous cars 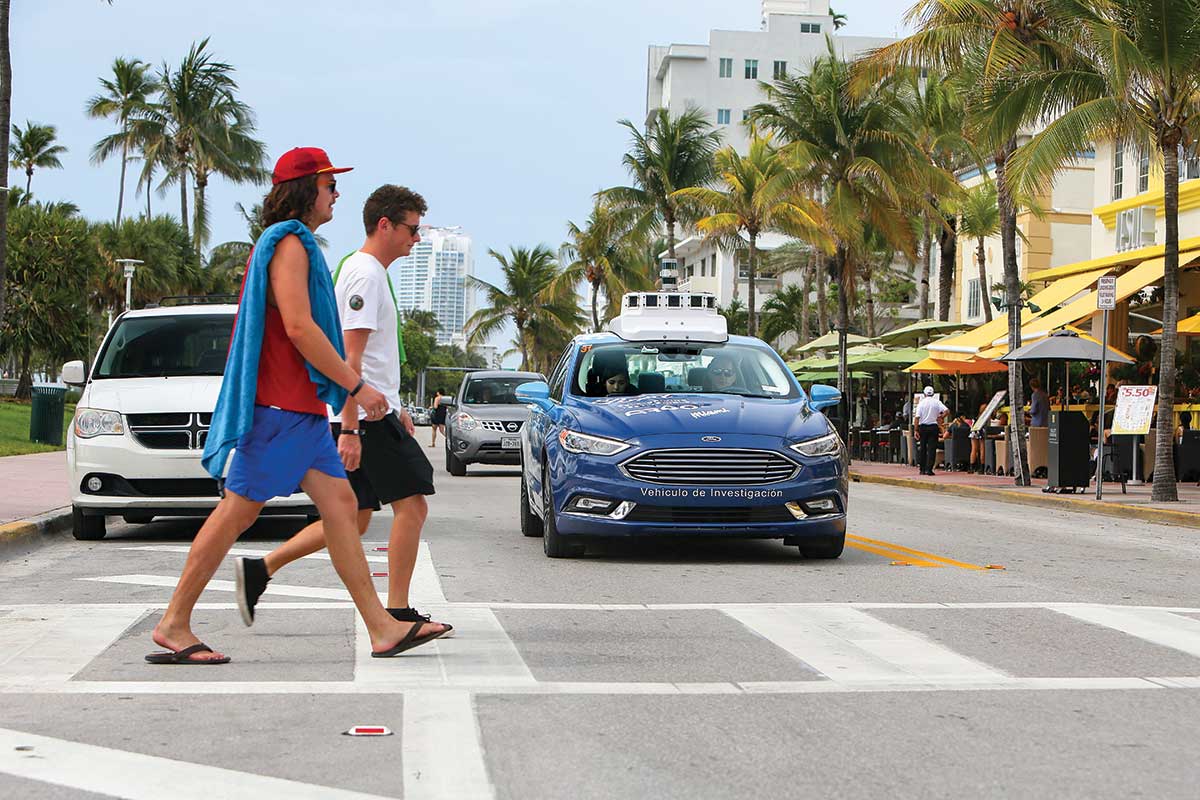 As Ford Motor Co. continues toward its planned 2021 rollout of non-commercial self-driving vehicles in Miami-Dade, county transportation personnel are eying mid 2019 to start thinking of ways to introduce the imminent technology to the public.

“Next year, maybe mid-year, we’re going to plan an event here and hopefully have autonomous vehicles that people can test,” Miami-Dade Transportation Director Alice Bravo said. “[The potential improvements to safety is] an important feature of autonomous vehicle technology that I’m really looking forward to. That’s why we’re working with Ford and other companies that may have approached us to help participate in helping to advance that technology.”

The event came less than nine months after Sherif Marakby, president and CEO of Ford Automated Vehicles LLC, announced the company had chosen Miami-Dade as “the first proving ground” for self-driving services.

Ranked the 10th most congested city in the world and the fifth in the nation by the Inrix Global Traffic Scoreboard, Miami-Dade was the perfect place to test its burgeoning fleet of vehicles in partnership with artificial intelligence developers Argo AI, Mr. Marakby wrote Feb. 27.

Ford one year earlier had committed to investing $1 billion over five years in the Pittsburgh-based startup, founded in 2016 by former Google and Uber leaders, a Feb. 10, 2017, release from the car company states.

“Miami-Dade Mayor Carlos A. Giménez is a champion of innovative technology [and] understands the potential of self-driving vehicles and how they can fit in, interact with and enhance [various transportation] modes and more,” Mr. Marakby wrote. “A new fleet of Argo vehicles is already on the streets, mapping the roads and accumulating miles that will help us improve the way they move through cities. The effort will grow throughout the year as we add vehicles and expand areas of testing.”

Vehicles in the pilots traversed Miami and Miami Beach delivering food to participants who opted in using the two companies’ mobile apps. The delivery vans and cars acted like mobile lockers, with coded access required on both the shipping and receiving ends.

But while they appeared driverless, the vehicles were semi-autonomous and still had human drivers at the wheel. The goal, Mr. Hall said, was to determine how best to deliver goods to customers while optimally navigating city streets.

“We used different vehicles [to analyze] different form factors to understand what is ideal for different delivery services [and] different interfaces for how the customer interacts with the vehicle – how [to] incentivize customers to choose the self-driving delivery option,” Mr. Hall said. “We’re [also] learning about the parking situation in cities – where [you] park if you’re a self-driving vehicle that makes it convenient for customers to walk out, because they need to walk out versus a delivery person walking to their door.”

Business-specific needs also needed to be considered, he said.

“Walmart does groceries. Domino’s does pizza. Postmates does Styrofoam containers from restaurants,” he said. “[We had to learn] how to build vehicles to accommodate those different needs.”

Ford estimates a $332 billion market addressable by AV technology by 2026 comprised of $130 billion in last-mile goods delivery and $202 billion in ride-hailing services currently offered by companies like Uber and Lyft, graphics shown to attendees of last month’s event note.

Each of the two markets is to be serviced by purpose-built vehicles using Argo’s self-driving system flexible enough to service multiple uses, have commercial durability, be integrated for city safety and built for scale with naturalistic driving.

To maximize their time on the road, or “uptime,” the vehicles will be hybrid electric, have efficient routing and dispatching and benefit from strategically placed terminals.

The vehicles also will probably feature “light bars,” mounted at the top of their windshields that signal their intentions to pedestrians and drivers of non-AV vehicles.

“We tested three different lighting scenarios, as well as a baseline condition where the lights were off, to observe how pedestrians and other road users responded to the vehicle signaling its intent,” John Shutko, human factors technical specialist for self-driving vehicles at Ford, wrote on Oct. 2. “The results proved there is a baseline for us to build from in terms of the potential to improve acceptance of self-driving vehicles and trust in the technology.”

Ford then ran a subsequent virtual reality study to test the trust and acceptance its researchers hypothesized. In the digital world, Ford placed study participants on street corners to observe and measure their reactions to complex mixtures of vehicles crossing through an intersection, some equipped with the light bars and some without.

With no prior explanation of what the different light signals meant, participants took roughly two exposures to learn what a single signal meant and between five and 10 exposures to understand all three lighting patterns used.

Equipped with its new findings, Ford planned to bring what it learned back into the real world, in Miami-Dade, and working with the International Organization of Standardization and Society of Automotive Engineers to create a unified communication interface for self-driving vehicles.

“We’re installing the self-driving interface on a small fleet of our Fusion Hybrid self-driving development vehicles to be used by Argo AI in Miami-Dade County,” he wrote. “Ongoing testing will continue to expose pedestrians and other road users to the light bar so we can observe their reactions.”

Last week, Mr. Hall told Miami Today that testing was ongoing in Miami, with plans to expand the effort still being formulated.

“This is really an important part of helping us integrate self-driving vehicles into an environment and helping people trust these vehicles,” he said. “We are in the process of pulling together a more formal test plan and being active down in Miami as well as Washington, DC, so we’ll have more to talk about in the coming months in the form of more formalized testing and community engagement.”