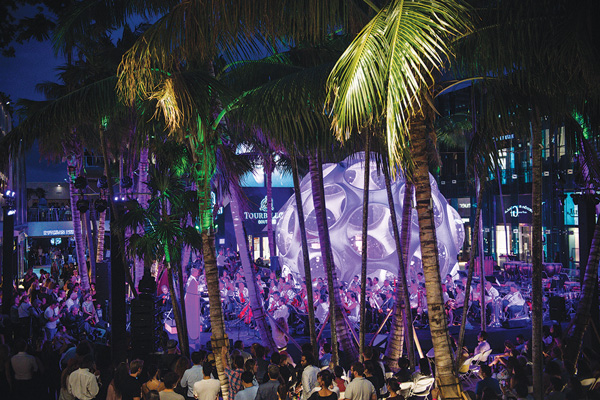 The turnout has held steady since the kickoff to the Miami Design District Performance Series in early October and the numbers thus far indicate a stronger season than last year. The orchestra received 12,000 reservations prior to the first event alone, with 10,000 ultimately attending. The most recent free concert saw 5,000-plus attendees.

“We are growing and people are noticing what we are doing,” said orchestra Production Director Gabriela Landaeta.

The public can see shows free at the Design District’s Palm Court at 140 NE 39th St. every Friday until Dec. 14, the finale holiday concert. Symphonies are performed by 80 professional musicians hailing from Asia, Latin America and Miami. Orchestra enthusiasts can also pay to attend concerts at the Adrienne Arsht Center for the Performing Arts at 1300 Biscayne Blvd. and in the Moore Building at 191 NE 40th St.

Free concerts serve two purposes. Ms. Landaeta said: “It is learning about what Miami likes for us to give it. We appreciate giving something to the community. That’s why maestro is eager to do this free concert, because not everybody can pay for a ticket.”

The ability to fund both free and ticketed events takes an investment, and the orchestra taps into several money pockets to afford the opportunity. The City of Coral Gables, Miami-Dade County Department of Cultural Affairs, Miami Beach Cultural Arts Council, National Endowment for the Arts, State of Florida Division of Cultural Affairs are just a few entities the orchestra counts on for funding.

The coming months and line-up should please the variety of classical tastes in Miami. Highlights at the Adrienne Arsht Center include “Ocean Drive in Vienna” in January, “A ’60s Musical Journey with Rudy Perez and friends” in March, and “The Three Bs Grand Season Finale” showcasing compositions by Bach, Brahms and Beethoven in April.

The variety of programming reflects the orchestra’s attempt to appeal to a wide-ranging audience. Ms. Landaeta said, “We need to innovate continuously. Miami is different in regards to the culture. We have many people living here from different countries.”

Plans for the next season are in the works and, Ms. Landaeta says, “next season is going to be better than this season. We are always trying to get better.”