Advertisement
The Newspaper for the Future of Miami
Connect with us:
Front Page » Profile » William Talbert III: Looking to game-changer convention headquarters hotel 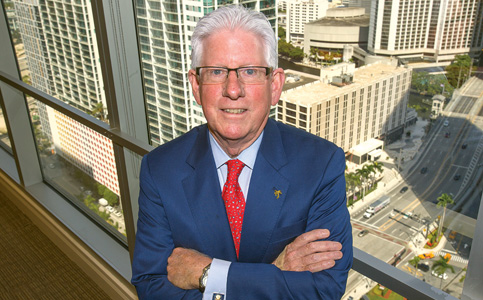 As president and CEO of the Greater Miami Convention & Visitor Bureau, William Talbert III has for almost two decades steered the official destination and sales and marketing organization for Miami-Dade County and roughly 1,100 private business partners.

His tenure is decorated with major accomplishments, including assisting with the passage of the Travel Promotion Act, a food and beverage tax to fund the bureau’s advertising budget, negotiating government funding agreements, preparing five successful Super Bowl bids – capped by securing the NFL’s centennial year Super Bowl in 2020 – and hitting a record $26 billion in overnight spending by nearly 16 million visitors from September 2016 to August 2017.

Next year marks Mr. Talbert’s 20th year as president and CEO. The year after, he’ll celebrate 30 years with the bureau.

Mr. Talbert, whose event-memorabilia-filled office overlooks the Miami skyline and PortMiami, said he still treats every day like it’s his first.

“We’re one of the top destinations in the world, and every day is a new day,” he said. “The beauty of Miami is it’s evolved over time. It’s far different – and better – than 30, 20, and frankly five years ago. That excites me.”

Next on the table, he said, is a proposed 185-foot, 800-room headquarters hotel to rise beside the newly renovated Miami Beach Convention Center if 60% of Miami Beach voters approve an item on the Nov. 6 ballot to lease public land for the project.

“It’s a game-changer,” he said. “We’ve been out of the convention business for several years [and have worked] on this for 17 years. Now the re-imagined convention center is open, our next move is to complete the job with an attached headquarter hotel, like all of our competition.”

Mr. Talbert sat down with Miami Today reporter Jesse Scheckner. The interview, recorded by Jahmoukie Dayle, can be found Friday at http://bit.ly/2uNHy0Q.