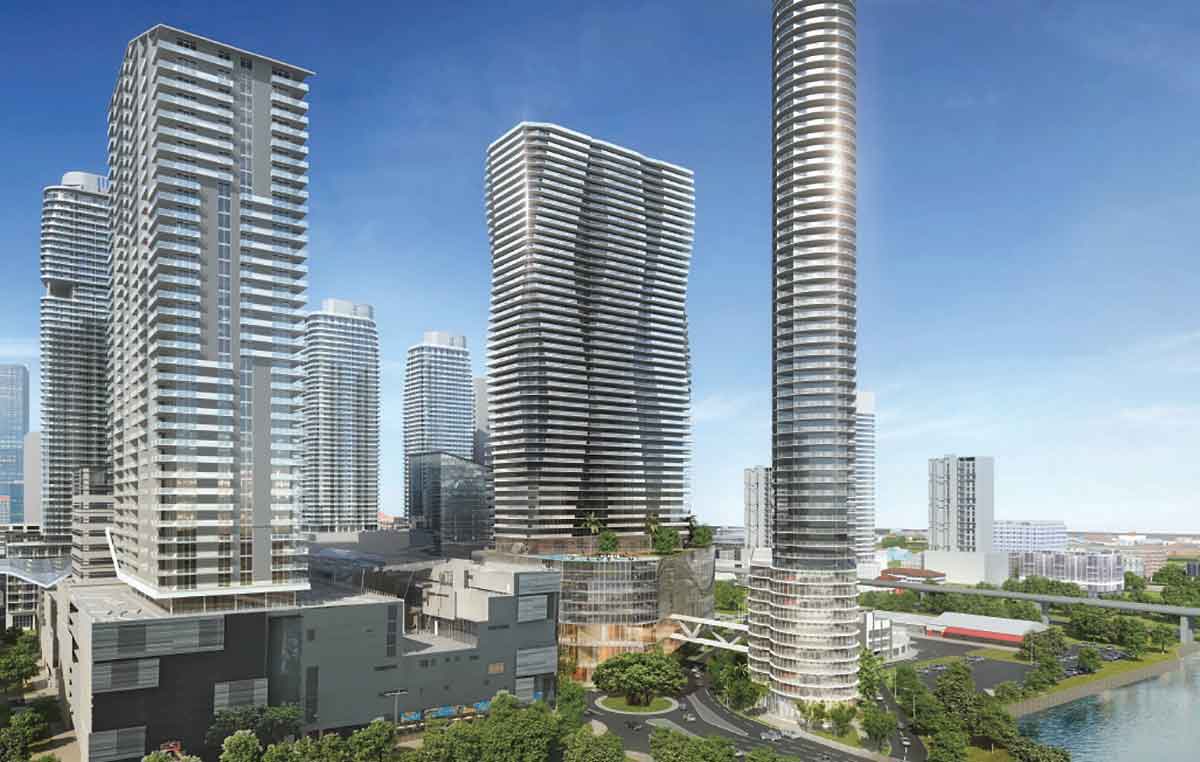 The revision would allow two sites to be redeveloped: the former Associated Photo site at 19 SW Sixth St. and 650 S Miami Ave., site of the former Tobacco Road.

“These are the missing pieces,” said Christian Gondolfo of Swire Properties. “The driving force is connectivity,” he told the DDA.

Besides two more residential towers, the proposal would bring nearly 90,000 square feet of added commercial space, a ground-level plaza, more parking, and enhancements around and under the South Miami Avenue Bridge to the expanding project.

The DDA’s affirmative vote came Oct. 19. The week before, the city’s Urban Development Review Board also recommended approval of the new SAP for the sprawling mixed-use urban development.

The latest amendment is to go before the Miami City Commission next month.

This latest amendment to the SAP takes the development from 11.4 acres to 13.96.

The new plan is for two residential towers, one at each site.

The towers will connect by pedestrian bridges to the existing Brickell City Centre, and Swire plans an extended paseo, or walkway, along South Miami Avenue from Southeast Fifth through Seventh streets, Mr. Gondolfo said.

The riverfront will also be revitalized as part of the pedestrian trail, he added, with the purchase of remnant land that the Florida Department of Transportation was using for storage.

The economic impact of the revised SAP could be significant, he said.

When the first phase of Brickell City Centre was being planned, Swire projected the financial benefits to the city and county, he said. But once the project was built, “impact and permit fees, DRI fees, jobs created, and property taxes all worked out to be higher than projected,” Mr. Gondolfo said.

If approved, this phase could break ground in 2020 and would require three years to complete, he said.

“SAPs are having a moment,” said Ken Russell, authority chair and Miami city commissioner. “Some are being used for creativity and some for capacity. Everyone is watching closely. I like the activation of the Baywalk/Riverwalk.”

“I like the connectivity,” said DDA board member Danette Linares, who made the motion to support the SAP. She is vice chair of Blanca Commercial Real Estate.

“These are empty lots,” said board member Gary Ressler, who is a principal at the Tilia family of companies.

Spencer Crowley, an attorney representing Swire Properties Inc., detailed the latest plans for the growing complex in a letter to the city’s Planning Department dated Sept. 14.

He noted that the city has approved several projects related to the development, most notably the Brickell City Centre Special Area Plan in July 2011, and two further amendments to the SAP in 2013 and 2014.

The added blocks are directly northwest of the existing Brickell City Centre, which began vertical construction in 2013.

“Foremost among such elements is a new ground-level plaza and circulation within the BCC 650 SMA block; and additional landscaping, hardscaping, and lighting improvements throughout the Project that will coordinate with ground-level pedestrian enhancements at the existing Brickell City Centre.

“As with other portions of Brickell City Centre, the BCC 650 SMA and AP blocks also physically link to the rest of the project through above-ground pedestrian connections spanning public right-of-way. This public benefit will allow direct covered access from the BCC 650 SMA and AP blocks to the retail mall and the Metromover under the iconic climate ribbon feature of Brickell City Centre,” he wrote.

The latest proposal includes a bundle of new renderings showing the planned towers, pedestrian plaza, and more, from the project’s architectural firm, Arquitectonica.

As an additional public benefit, Mr. Crowley said Swire will provide pedestrian mobility; safety, and aesthetic enhancements around and under the South Miami Avenue Bridge.

Although not technically part of the Miami River Greenway, these improvements south of Fifth Street will coordinate directly with the Greenway and open up pedestrian connections to the Miami River from the Brickell City Centre project and South Miami Avenue that don’t now exist, according to Mr. Crowley.

“In sum, Swire is privileged to be a part of the transformation of downtown Miami and the Brickell neighborhood, with the completed phase of Brickell City Centre now acting as a catalyst for future growth and development,” Mr. Crowley wrote. “This proposed amendment to the Brickell City Centre SAP furthers that positive momentum and expands the potential impact of the SAP to neighboring blocks.”