Advertisement
The Newspaper for the Future of Miami
Connect with us:
Front Page » Top Stories » County OKs funding most of study for dredging to add PortMiami capabilities 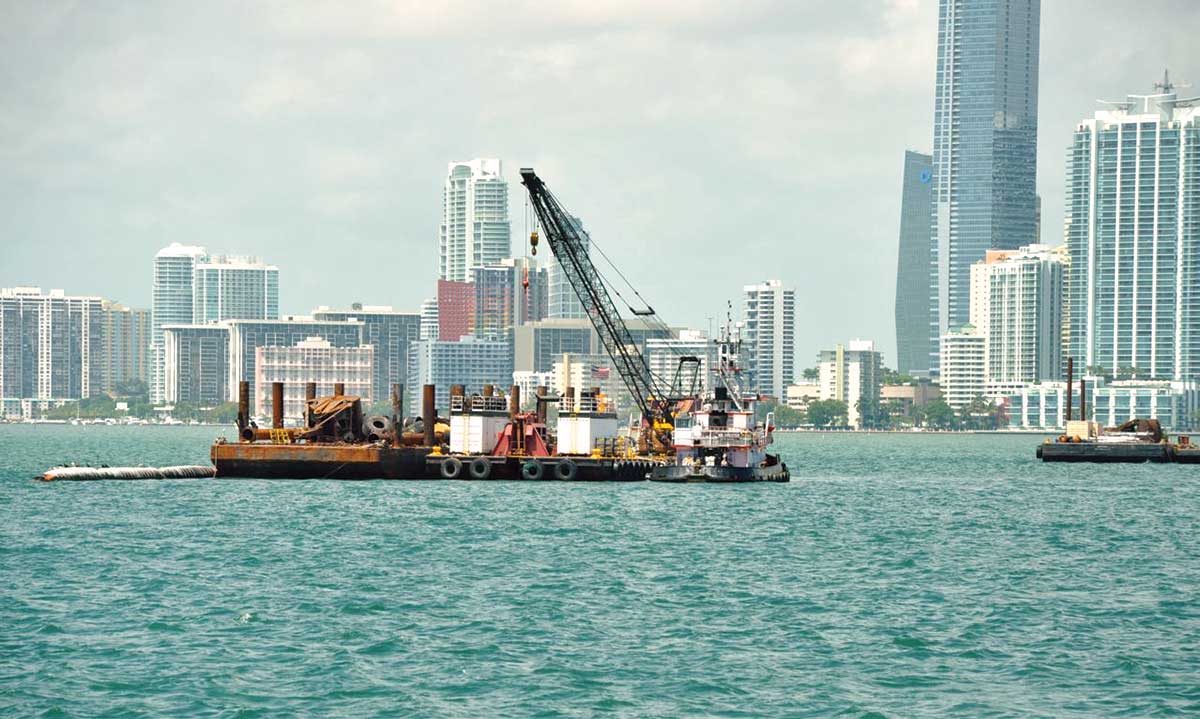 Miami-Dade commissioners have approved paying both the remainder of the county’s investment in a $3 million feasibility study of improvements to PortMiami as well as the portion the US Army Corps of Engineers would be responsible for paying.
Commissioners last week OK’d spending a total $2,443,750 to fund the study – a combination of $556,250 the county spent to start the study in June plus $1.8875 million to cover the county’s half of the remaining balance and advance fund the Corps’ share.
Because a 2019 civil works plan has not yet been released, the Corps may not allot funds for its remaining share until the plan becomes available, according to a July 24 memo from Deputy Mayor Jack Osterholt.
Seaport department staff members responsible for monitoring the federal cost share agreement are Becky Hope, chief planning and real estate development, and Hydi Webb, deputy port director.
“Our seaport is a vital economic engine for not only Miami-Dade County but all of South Florida, and its continued growth represents thousands of jobs and increased opportunities for our community,” Commissioner Rebeca Sosa, chairwoman of the Trade and Tourism Committee, said in June.
A public meeting highlighting alternatives and a tentatively selected plan are expected by 2020 upon completion of the plan, Corps spokesperson Susan Jackson previously told Miami Today.
Improvements being researched are mostly meant to accommodate larger commercial cruise vessels coming to PortMiami, which are constrained under current conditions, according to port spokesperson Andria Muniz-Amador.
Many of the cruise ships are unable to pass containerships docked at berths while being loaded, leading to delays, according to Ms. Jackson, who wrote that improvements would increase efficiency, cruise industry growth and facilitate the creation of more cruise vessel berths.
Biscayne Bay Pilots assisting ship navigating the harbor are having trouble maneuvering the large ships, as well as freighters with cargo capacities of 11,000 TEUs (20-foot-equivalent units), Ms. Jackson wrote.
With freighters of up to 14,000 TEUs now in the world fleet, those troubles will only worsen.
Visiting vessels now demand to be scheduled weeks in advance to determine arrival conditions, and their greater size requires precise accommodation.
“In order to expand the economic significance of PortMiami, sustained investments in infrastructure are critical,” Miami-Dade Mayor Carlos Giménez said in June.
On March 26, Port Director Juan Kurlya requested a new study of navigational and safety harbor improvements from the Corps, including deepening and widening the outer channel, widening the Lummus Island turning basin and widening of the south shipping channel.
The expansion done by the Corps, he wrote, would complement upgrades made during the Miami Harbor Phase III Improvements project that ran from 2012 to September 2015.
Phase III, which cost $205.6 million, according to Corps documents, deepened and widened Fisherman’s Channel and the Lummus Island turning basin.
Improvements to PortMiami began in 1990, when Congress authorized deepening and expansion of the port to 42 feet, and were completed three years later.
Phase II of improvements began shortly after and cost $40 million to upgrade the south harbor; however, geological obstruction halted the project until July 2006, when the Corps’ Jacksonville District completed the work.
In February 2004, the Corps used the 1,140-foot, 6,000-TEU Susan Mærsk freighter as its model vessel in determining the port’s optimum depth. Its underkeel clearance, or minimum clearance between the deepest point of the ship and the bottom of the port, was set at three feet.
Today, many vessels exceed that depth, Ms. Jackson wrote.
The 2018 Work Plan for the Miami Harbor Safety and Navigational Channel Improvements Program at PortMiami adheres to the Corps’ “three-by-three” rule, requiring completion within three years, no more than $3 million in federal dollars in cost and concurrent review at the Corps’ district, division and headquarters level.
PortMiami contributes more than $41.4 billion of economic impact annually to the county and generates 342,352 direct, indirect and induced jobs, according to Ms. Muniz-Amador.
“As the port continues to increase its capacity,” Mr. Kurlya said, “the feasibility study for the Miami Harbor Safety and Navigational Channel Improvements Program is another important step to further serve our current customers and respond effectively to the next generation of cruise and cargo business.”