Advertisement
The Newspaper for the Future of Miami
Connect with us:
Front Page » Arts & Culture » Four-block stretch in Wynwood to become a street mural

Four-block stretch in Wynwood to become a street mural 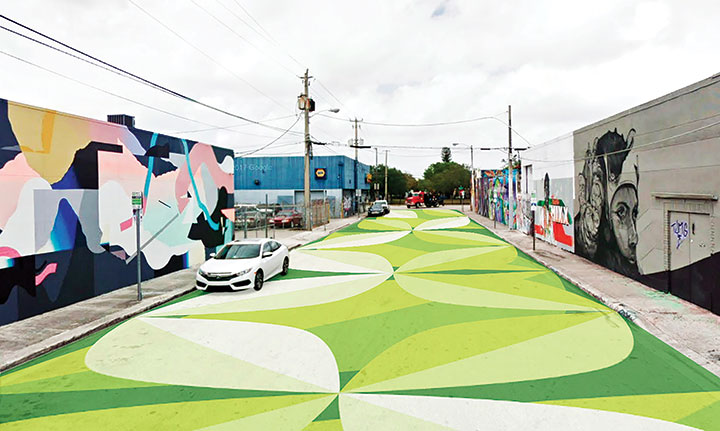 Designers Sebastian Cuevas and Cristina Nunez, both based in Latin America, won a design competition to transform a four-block stretch of Northwest Third Avenue in Wynwood into a street mural, directors of the Wynwood Business Improvement District (BID) learned July 11.
The artists chose a geometric leaf-shaped design in several shades of green. “The mural transforms the street into a temporal green space at the heart of Wynwood district,” the artists said in a statement submitted with the design. “The proposal is inspired by the native flora of Miami to create an organic pattern painted with different green tones. The intervention changes [Third] Avenue in a radical way and integrates it to Miami’s landscape.”
In May, the BID and the Street Plans Collaborative sent out an informal request for design proposals from artists. There’s no cash prize, so the organizers hoped that artists would compete just for exposure in this most art-centric of all neighborhoods. The collaborative, most likely using volunteer labor, is to convert the design into a stencil and then apply it to the street later this year.
While BID board members are generally supportive of the project, some raised questions.
Joe Furst, BID chair and Goldman Properties managing director for Wynwood, wanted to know the duration and budget of the project and who would be responsible for maintain it. “Can we get answers before they begin?”
He said when the project was first discussed, it included parklets, seating and other features. “It was going to be a fun pilot program.”
“My understanding is that it’s going to be permanent,” said Albert Garcia, BID vice chair and chief operating officer of Mega Shoes. Third Avenue, he added, “is not in the best shape today.”
Anything that goes there “is just going to increase awareness of Third Avenue,” said David Polinsky, BID board member and principal of 250 Wynwood.
It could always be changed later, suggested BID board member Irving M. Lerner, a Wynwood property owner.
“I haven’t seen details,” said Manny Gonzalez, BID executive director. “I’m sure they’ll walk us through this.”
“To be brutally honest, there’s a chance it might not even happen,” Mr. Garcia said. “There are a lot of variables to deal with. We’re just not there yet.” He counseled patience.