Advertisement
The Newspaper for the Future of Miami
Connect with us:
Front Page » Top Stories » Renovations on Flagler Street delayed once again

Written by Catherine Lackner on May 22, 2018
Advertisement 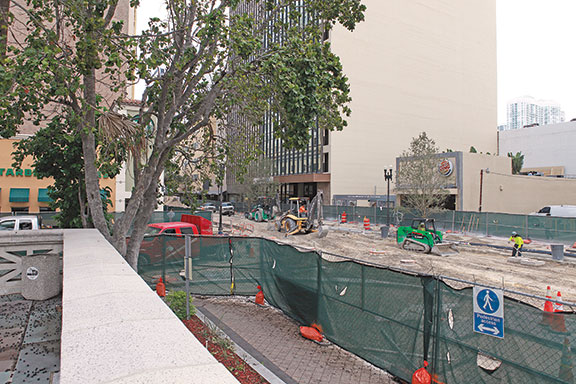 Directors of Miami’s Downtown Development Authority have once again voted to delay the resumption of renovations on Flagler Street, this time for 30 days. But some signaled that they are getting weary of the postponements.

“How much longer are we going to drag this out?” asked board member Alicia Cervera, managing partner of Cervera Real Estate. “I’ve had it. These things are devastating to the businesses there.”

“Multi-generational businesses are leaving,” said Gary Ressler, authority board member and principal of the Tilia family of companies.

In February, the group agreed to a 90-day delay to consider suggestions by Moishe Mana, an investor who has bought a portfolio of Flagler Street properties.

Mr. Mana has suggested raising the roadbed slightly and eliminating curbs – as has been done in Midtown Miami and Miracle Mile in Coral Gables – to create a “festival street” that would be more open. “It’s a big-sky, tropical vision,” Dylan Finger, Mana Wynwood managing director, said then. “We looked at a broad range of designs.”

The change would take about 36 months to complete with the current contractor, and 42 months if a new request for proposals has to be issued, he said then. It would only affect the curbs and roadway; the sidewalks would remain the same, he added.

The money could come either from bond funds or from a second assessment of Flagler Street property owners, he added. (The first assessment came at the beginning of the project.) With a 30-day delay, the task force will have time to research funding options, Mr. Kasdin said.

“Thirty days eats at me,” said Bernard Zyscovich, a prominent architect who has had offices downtown since 1986. But he urged the downtown group to support the Mana plan.

“We should do what we can to get the proper solution and see how we can pull together the money to do it properly.”

“Clearly, the revision is the better plan,” Mr. Ressler said, “but I’m not sure the property owners will be dragged along.”

The delays come when the project is between contractors. The city fired the first, F.H. Paschen; Lanzo Construction has been chosen to continue the work.

The renovation has been talked about since 2011; construction began in early 2016, but to date, only one block has been completed. Authority members faulted Miami’s Capital Improvement Program for not supervising the contractor. There have been multiple problems at the jobsite, including a maze of underground utilities that did not conform to site maps and other unforeseen obstacles.