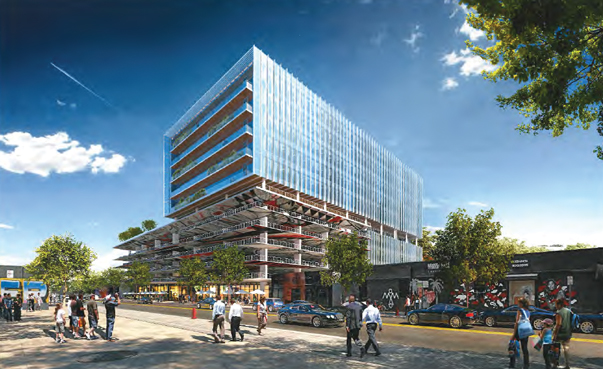 A Chicago development company whose client list includes Google and McDonald’s plans to build a large office building in Wynwood.

The proposal is for a 10-story mixed-use office building with ground floor retail, to be called 545 WYN.

The City of Miami’s Urban Development Review Board on April 18 recommended approval of the project, with two conditions.

The project, designed in an “L” shape, is to provide 511,058 square feet of total development. The bulk of the space is planned as nine stories of leasable office space amounting to 209,050 square feet.

Leasable commercial-retail space on the ground floor along the north, south and east facades will total about 28,436 square feet.

An on-site garage will have space for about 459 vehicles.

An unusual aspect of the planned garage is an open design, compared with most garages built currently with screening of the vehicle levels. Inspired by the street art of the Wynwood Arts District, the plan calls for colorful artwork on the underside of the parking levels, illuminated by upturned lights and visible from the street.

The application shows projected open space at 5,745 square feet. It also notes that a bonus height of two stories will be satisfied by payment into the city’s public benefits trust fund.

The project requires special permission via a warrant for on-street turning movements for one additional loading berth, and waivers for up to 30% reduced parking (for projects near transit), and a waiver for extension above the maximum height for rooftop elevator, stairway and mechanical equipment.

The Wynwood Design Review Committee met this month and recommended approval of the project with two conditions: a study on the garage lighting to be completed and reviewed by staff; and the project be brought back to the committee for final art and signage approvals.

Attorney Steven Wernick, representing Sterling Bay, told the review board this project will be the first vertical project built since adoption of special zoning rules known as Neighborhood Revitalization District-1 (NRD-1) for Wynwood.

The goal is to construct a Class “A” office facility in Wynwood to bring more business to the city, he said.

In a letter to the city, Mr. Wernick said the property is at the western edge of the Wynwood Neighborhood Revitalization District, approaching I-95 (just west of Northwest Fifth Avenue, between Northwest 26th and 27th streets). The site is home to three aging single-story warehouses along Northwest 26th Street, which are set back significantly from the street behind front-loaded surface parking, and a surface lot enclosed by a chain link fence along Northwest 27th Street.

“The property has historically been used for commercial and light industrial purposes, typical of properties in the Wynwood Arts District that forms the basis of the NRD-1. A new mix of office, retail and restaurant uses, as the applicant is proposing for the project, is permitted by right under the property’s current zoning,” Mr. Wernick wrote.

“Sterling Bay has earned a reputation over the past decade as a creative and skilled developer, and driving force behind the revitalization of Chicago’s West Loop and Fulton Market District, where Sterling Bay has helped reinvent the former agro-industrial district as an urban employment and retail center, attracting creative office tenants and a number of large national employers relocating high-paying jobs and corporate headquarters to the area, including Google’s Midwest HO and McDonald’s Global HO,” he wrote.

Understanding the pulse and context of a neighborhood is central to Sterling Bay’s ethos, he added.

Sterling Bay representatives told the review board they are excited to be bringing 545 WYN to life in Wynwood.

“We want to fit in to the fabric of the neighborhood,” said project manager Anthony Hrusovsky. “We are very excited about the Wynwood area and Miami in general.”

The project’s artwork will “integrate nicely” with the neighborhood, he said. Art will be a critical component of 545 WYN and help add vibrancy to the street life, Mr. Hrusovsky said.

Mr. Wernick said the project will bring a unique creative office product to Wynwood that will inject more daytime foot traffic and help support restaurants and other retail establishments flourishing in the neighborhood.

He wrote of the open designed parking levels, “The building’s on-site parking decks are treated as a canvas for artistic intervention, with curated artistic murals/mosaics projecting from the bottom of each slab befitting of the artful and unique aesthetic of the surrounding Wynwood neighborhood. The murals will be clearly visible from the pedestrian street perspective and act as an appropriate contrast to the building’s structural elements in a distinctive manner, but consistent with Wynwood’s unique industrial-chic character.”

Architect Rob Muller of Gensler spoke about details of the proposed building. He cited two main goals: be authentic to the neighborhood and attract the right tenants.

“We tried to create the most efficient floor space use,” he said. There will be a “fantastic” amenity deck dedicated to the tenants, he said.

The plan to paint the underside of the parking decks is designed “to make the artwork in the garage a dominant element,” Mr. Muller said.

The decks will be up-lit with soft, subtle lighting, he said, to “celebrate the wonderful painting.”

One side of the office building is proposed for a large mural, on metal and glass of different sizes in a gradient design, he said.

Board member Neil Hall said it was a wonderful presentation, and he appreciated how the developer wants to fit well with the community.

“You’ve shown sensitivity in the artwork,” he said.

Acting Chairman Dean Lewis said it was a good project that could be a great project. He said the overall design wasn’t Wynwood-esque enough; that the office building was in some ways typical of office buildings in the city.

Mr. Lewis suggested fins and a sculptural component to the façade to give it more of a twist and synergy.

“I’m waiting for a structural surprise,” he added.

Mr. Lewis said he was surprised his point didn’t come up at the committee review in Wynwood.

“I’m disappointed. You’ve got a cube … a clean-cut beautiful box,” he said.

“We appreciate what you’re saying,” said Mr. Muller, but in the end, the architect is to deliver what the client desires. He emphasized working to accomplish dual goals of attracting the right tenants and fitting in with the neighborhood.

Mr. Muller said they believe that in the end, when all the artwork is decided on and the structure rises, everyone will be happy.

Board member Gerald Marston complimented the design, noting that architects worked to break the building into three distinct pieces.

“The amenity deck is a really wonderful idea,” he said.

Mr. Marston also said the review board prefers to see artwork created by an “artist-artist.”

Board member Ignacio Permuy said the project will be a positive addition to the neighborhood.

He complimented the design and site layout. “I like the interaction of parts. It’s refreshing,” he said.

The review board recommended approval with what members called minor conditions; that artists be engaged for the artwork and that a landscaping plan for the amenity deck be further developed by working with the city’s planning director and staff.