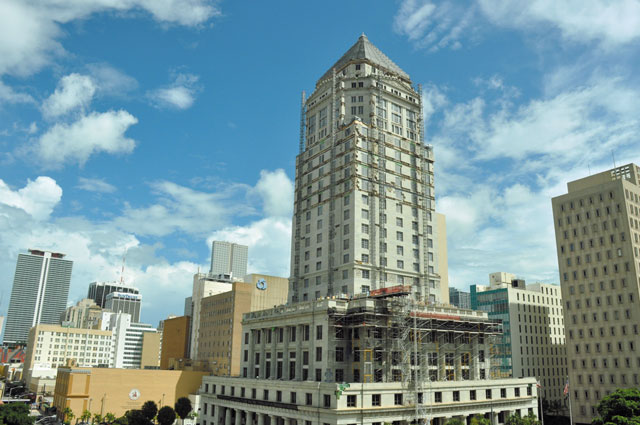 “Today is a great day,” said Chief Judge Bertila Soto of the Eleventh Judicial Circuit of Florida at the commission meeting. “I cannot thank you enough. I’ve been saying there is an urgent need for four years, but today I feel like there’s a plan.”

The original master plan called for 600,000 square feet with 26 floors, costing an estimated $361 million. Mr. Giménez requested the administration cut the cost of the courthouse by $87 million, reducing the footprint to 525,000 feet with 20 floors.

At the Chairman’s Policy Council last month, Internal Services Director Tara Smith said the reduced scope of the courthouse would not affect its impact and would save the county money.

“This still allows us to immediately build 47 jury and non-jury courtrooms and expand the space to 55 courtrooms by 2035,” Ms. Smith said, “which exceeds the 52 courtrooms recommended by the master plan.”

Judge Soto told Miami Today this week that the mayor’s amended scope would slice the number of jury rooms in half.

Though she wants the courthouse to be equipped with all of the latest technology, Judge Soto told Miami Today the number of jury rooms the county needs won’t be changing any time soon.

“The one thing unlikely to be affected is the constitutional right to a jury trial,” Judge Soto said, which requires a “live process and a live courtroom.”

Harvey Ruvin, the clerk of the courts, agreed with Judge Soto at the meeting, advocating for the commissioners to vote on the original master plan. Mr. Ruvin’s offices are at the existing courthouse site.

“I feel the same passion for the courthouse,” Mr. Ruvin said. “This is the people’s courthouse and we bring in over 1 million people a year through those courts and over 15,000 a year for jury duty.”

Mr. Ruvin reminded commissioners the county spent over $1 million on the master plan, “not counting the countless hours.”

“We need to keep faith with the master plan because we don’t want to build a building that will be obsolete within three years of being built.”

Judge Soto told Miami Today the new site has to be built soon as the current building is in perpetual disrepair.

“In the meantime we are dumping millions and millions of dollars into 73 W Flagler in a building that is too small and technologically impaired,” she said. “The need is established and the longer we’re there, the more money the county has to spend.”

The existing Dade County Courthouse on Flagler Street was begun in 1925, when the county had only about 100,000 residents compared to today’s 2.7 million. The courthouse has long been deteriorating and is far smaller than is now needed. Its replacement has been debated at the county for years.

Judge Soto told Miami Today the courthouse needs to move forward quickly, and the master plan is the best option.

“If we minimized the footprint, we would be bidding against ourselves,” Judge Soto said. “We’re not just designing this for the next ten years. We think that the private sector will produce efficiencies,” Judge Soto said. “Let’s see what the market says before we undercut our own efforts.”

Commissioner Daniella Levine Cava asked Ms. Smith why commissioners needed to vote on the master plan immediately and not wait.

“It will allow us to move the project forward efficiently,” Ms. Smith said. “The RFP [request for proposals] is going to require a lot of work from myself and the stakeholders to decide on the size, shape and what the building will look like, and I want a smooth transition between the RFQ [request for qualifications] and RFP. Whether unsolicited or through the RFQ, there has to be a decision made about this courthouse,” Ms. Smith said.

Against the advice of Ms. Smith, commissioners last month decided to pursue a dual-track method when they issued an RFQ while an unsolicited proposal was already under review.

Under new legislation sponsored by Commissioner Jose “Pepe” Diaz last year, the administration has 30 days to respond to an unsolicited proposal. The mayor can then take another 90 days to review the proposal and open it up to additional bidders.

Ms. Smith recommended to the commissioners last month that they wait for a response on the unsolicited proposal before issuing an RFQ, as it would be confusing to the market to have two options to bid on.

Commissioners instead voted to move forward with the dual track, issuing the RFQ last week.

Commissioner Rebeca Sosa said she was tired of the county delaying items and not taking action, and asked the county attorneys when the mayor is set to give a decision on the unsolicited proposal.

“If we don’t establish timelines, then we are in the same conversation three months later,” Ms. Sosa said.

County attorneys told Ms. Sosa that the administration has until Friday to decide if it would like to move forward with the unsolicited proposal and open it up to competition. The mayor then has an additional 90 days to review the proposal.

Ms. Heyman accepted an amendment from Ms. Sosa that reduced the mayor’s 90-day review to only 30 days.

Commissioners unanimously voted to keep the original master plan of the courthouse and expedite the process of the unsolicited proposal by reducing the mayor’s review time.

“We ask for the swiftest and most competitive process,” Judge Soto said. “This will be the people’s courthouse for the next 50-100 years, and today is the day that we begin building their courthouse.”