Advertisement
The Newspaper for the Future of Miami
Connect with us:
Front Page » Government » Brightline owner offers to develop Miami-Dade County courthouse 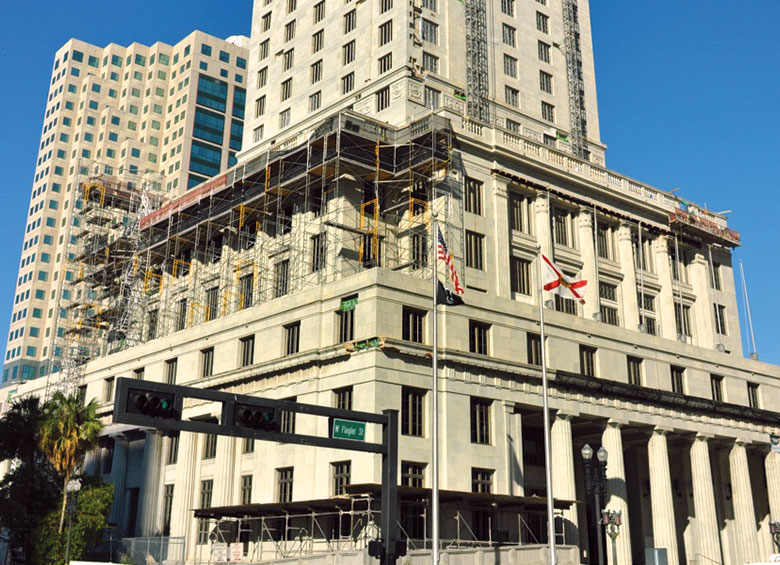 With an unsolicited proposal from the developers of All Aboard Florida’s Brightline to build a Miami-Dade civil courthouse on the table, plans seem to be hitting another snag as the administration and Chief Judge Bertila Soto differ on the project’s scale and cost. At the Chairman’s Policy Council, commissioners asked attorneys to draft legislation to return to the original, more expensive plan for the building.

“We know the critical need at the old courthouse and the calendar set forth by the Internal Services Department over a year ago said that RFQs (requests for qualifications) were supposed to be due and decided on and we even had a vision for a groundbreaking in 2020,” said Commissioner Sally Heyman, who brought the item to the council for discussion. “I’ve heard a lot of good statements that seem to be falling into excuses, rather than focusing on getting it done.”

While the commissioners discussed the unsolicited proposal at the Chairman’s Policy Council this month with the county administration, no mention was made of who had made the proposal nor what it comprises.

Internal Services Director Tara Smith told Miami Today on Tuesday that the New Flagler Courthouse Development Partners submitted the proposal to the county. They are comprised of Florida East Coast Industries, the developers of Brightline; Hunt/Moss, a joint venture of Hunt Companies and FL-based Moss Construction Management; and CGL, a Hunt affiliate.

Though the county has received the unsolicited bid, “we haven’t moved ahead on soliciting bids,” Ms. Heyman said.

County attorneys assured commissioners there is no legal impediment to requesting proposals for the project but it may be in the best interest of the county to hold off a bit before soliciting them.

“While there is no legal reason we cannot do it, we expect a markedly decreased level of competition in terms of market response,” Ms. Smith said.

Ms. Smith said that after the county put out an expression of interest last summer, the market requested more information about what the county wanted and what it was looking for.

“That will result in a much more competitive process,” Ms. Smith said.

After Ms. Heyman expressed that she would like Internal Services to move forward with the bid solicitation while the current unsolicited proposal is being responded to, Ms. Smith said that is not the wisest decision.

“I don’t recommend putting them up simultaneously because it will set this project up for confusion and failure,” Ms. Smith said. “We need to take our time and respond to the unsolicited proposal.”

Issuing an RFQ while an unsolicited proposal is being analyzed is counterproductive and confusing to the market, Ms. Smith says, as the county will provide more information to developers when it responds to the unsolicited proposal and then have the option to issue an RFQ that is more specific.

The county received the proposal along with its fee Jan. 11, giving the mayor until Feb. 10 to decide if he would like to open up the proposal for further bids.

“We plan on submitting a recommendation one way or the other on Friday, Feb. 9,” Ms. Smith told Miami Today.

“I would prefer that the administration wait to make a decision on one before proceeding with the other,” Ms. Smith said.

County attorneys assured the commission there would be a chance for proposals and competition once the unsolicited bid was considered.

By waiting to address the unsolicited proposal, the county would be providing developers more information about what it is looking for in a new courthouse.

“The unsolicited bid puts [the process] in hyper drive and forces a reaction” from the market, said Commissioner Esteban Bovo Jr.

Once the county decides how to respond to the unsolicited proposal, Ms. Smith said, the RFQ is “virtually ready to go out.”

Mayor Carlos Giménez requested that Internal Services scale back the cost of the courthouse, reducing the fiscal impact by $87 million, Ms. Smith said. The reduced footprint is 525,000 square feet instead of the original 600,000 and would include 20 floors. The estimated fiscal impact would be about $274 million, the county estimates.

“This still allows us to immediately build 47 jury and non-jury courtrooms and expand the space to 55 courtrooms by 2035,” Ms. Smith said, “which exceeds the 52 courtrooms recommended by the master plan.”

The county had originally planned to allow developers to present options mixing current and old courthouse property with new buildings, but decided it wasn’t wise after getting market feedback, Ms. Smith said. “You have two different skill sets and it becomes murky to evaluate.”

The market feedback also led the county to decide on a single location for the courthouse so it is clear what proposals are bidding on and it is a more transparent and fair evaluation process, Ms. Smith said.

νThe new courthouse won’t take up valuable county assets that could be used later for an income stream that would offset the courthouse cost.

νThe new courthouse would allow the county to maximize an underutilized site.

To help offset the costs of the new courthouse and mitigate the impact on the general fund, the county is to leverage other downtown county properties.

Ms. Heyman and Chief Judge Soto of the Eleventh Judicial Circuit of Florida pushed back against the county’s plan to reduce the scale of the new courthouse, saying the county should adhere to its original master plan.

“I understand the budget constraints the county has and I certainly need a healthy building,” Judge Soto said, “but I would like to follow the master plan we worked on for two years and spent $1 million on.”

Though there will be two floors of shell space for extra courtrooms, Ms. Soto said it isn’t helpful to include them, as it is a long, painful process to get approval and money from the commissioners.

“Do you know what it’s like to come back to you two years after you build the courthouse and say, ‘By the way, I need another $5 million because we want to build the two floors?’” Judge Soto asked.

Ms. Heyman said that the delay and scaling back is wasting county time and resources.

“I have great reservations on scaling back,” Ms. Heyman said. “I want to stay with the original master plan that we all voted on twice.”

Ms. Smith responded that if the commission rejects the mayor’s recommendation to scale back and opts for the original $361 million version, “it will be a quick and easy change, because we have all of that information approved.”

Ms. Heyman moved to have the commission return to the original proposal and immediately request qualifications, rejecting the mayor’s scale-back request and the administration’s decision to hold off on the RFQ until after the unsolicited proposal was reviewed.

Chairman Bovo reminded Ms. Heyman that it was a meeting discussion item and there was no legislation to move forward.

“If you’re requesting legislation, we can just prepare it. That doesn’t require a motion or second,” an assistant county attorney said.

Deputy Mayor Ed Marquez then defended the administration’s decision to scale back.

“My boss directed us to go and see if the footprint could be reduced,” Mr. Marquez said, “not because we don’t want to give the courts everything they want, but because there is a fiscal reality. There is a cost to this. It’s not free.”

Mr. Marquez also reminded commissioners that it was not a unilateral decision by Mr. Giménez to reduce the county costs, as “several commissioners are telling us we have to be frugal on this.”

Mr. Marquez said the master plan was developed before the successful referendum to increase the homestead exemption, “so the general fund is going to be tight” and saving $87 million in construction costs is preferable to decreasing county services elsewhere.

In the meantime, Ms. Heyman is to work with county attorneys to draft legislation requesting that the courthouse in the original master plan be constructed.

“I was asked to do a dual track and we’ve done that,” Ms. Smith said. “While we are reviewing the unsolicited proposal we are also on a separate RFQ path.”

Ms. Smith said the final draft on the separate RFQ will be issued in the coming days before the county has a decision made on the unsolicited proposal.

When asked if this will confuse developers, Ms. Smith said it could be confusing to the industry to not know what the county wants.

“We’re putting people in a position where they could conceivably submit two different proposals,” Ms. Smith said. “The dual track is extra work.”

Ms. Smith said she can’t opine on what the final track would be, but hopes “we will soon have a clear path on how to move forward.”

The existing Dade County Courthouse on Flagler Street, begun in 1925, has long been deteriorating and is far smaller than is now needed in both facilities and number of courtrooms. Its replacement and its future have been debated for years.