Advertisement
The Newspaper for the Future of Miami
Connect with us:
Front Page » Opinion » Revolutionary end to Miami’s gridlock takes familiar route

So when the Fastrack Institute unveiled results of its $500,000 two-team battle last week we were at first underwhelmed that their answer to Miami’s traffic turmoil is just what we’ve been saying for years: carpool, ride mass transit and take bikes.

Not earthshaking. On the other hand, these three methods may be the easiest and least costly route to removing cars from roadways.

The twist coming from the winning Fastrack team, Citi.moov, is an umbrella app to link users and offer incentives and rewards for drivers to leave no-passenger autos for multi-rider trips or mass transit. Linkage and incentives can spell success.

None of this is revolutionary. It’s all common sense.

Citi.moov says it can create the app and do the whole job for another $500,000, which would put total cost of finding and enacting a solution at $1 million – a tiny fraction of the county transit department’s $540 million annual budget, though that probably is not where the money would come from.

As we noted back in September, you can find vital clues to good mobility policy in a 2016 US Census study that details how Miamians move around. The study found that nearly 96% of us had access to a personal vehicle and that 85.3% of us go to work each day in a car, truck or van, yet 76.2% of all workers commute alone by vehicle, only 5.3% via public transit and only a half percent by bicycle. 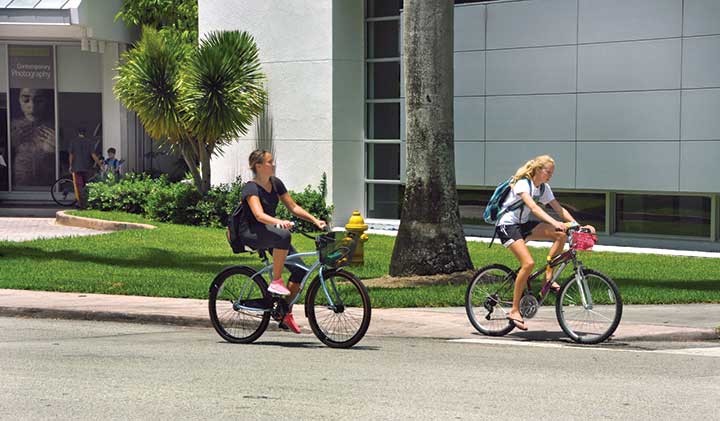 Bicycles are a piece of the winning Fastrack Institute plan to break up Miami’s gridlock.

Our conclusion was that if we could get 5.3% of all commuters out of drive-alone cars and into carpools of workers, we’d be clearing the roads of as many people as now take mass transit – about 141,000 each weekday as of October.

So the trick is to get one of every 33 workers out of a drive-alone car daily to instead ride with others via mass transit or in a multi-rider car, or onto a bike.

The bike piece of the puzzle, while picturesque, will be a very small slice of commuters in a county spread as widely as is Miami-Dade.

That leaves increasing use of mass transit and carpools.

Mass transit ridership depends not on new apps but on how well and reliably we can serve riders. That rests largely on a cluster of efforts that Miami-Dade is already undertaking, ranging from the long-term aim of six new mass transit legs to the do-it-now effort to get the transit we already have to run more reliably, more comfortably and more often.

The primary problem won’t be the equipment: new CNG buses are coming, as are new Metrorail cars. But how often and how reliably will they run?

As the Census Bureau study showed, the morning rush hour that many of us dread involves fewer than half of Miami’s commuting workers. Surprisingly, one-fifth of all Miamians arrive at jobs between midnight and 7 a.m., and much of the county’s mass transit shuts down overnight.

If it isn’t running when we go to work, there’s no way to get us aboard.

As we said years ago, to forsake cars we must believe that that transit will be reliable when we need it, not just when it’s convenient – or affordable – for government. The county must find a way to keep more vehicles rolling more often. That means stamping out excessive driver absenteeism.

The other piece of the pie, carpooling, offers great possibilities that we’ve barely tapped, though there have been experiments.

To get cars off the 826/836 interchange when it was being rebuilt, the Florida Department of Transportation in 2012 paid incentives to get people to carpool and ease construction traffic.

Results were thin, with only 850 monthly participants, reaching a single-month high of 944.

But bear in mind those incentives were only for drivers going through a single high-traffic point with a lot of red tape to qualify. What if the program had been countywide, with no restrictions on where the cars were headed, and operated more like Uber than like a state agency?

Moreover, what if it had been a well-promoted and sexy new app created by a high-tech mobility team rather than have the staid transportation department run things? We’d bet this could be a winning strategy and that 40,000 monthly users could be achieved in two years.

The Fastrack winner’s strategy is lots of partnerships. That’s good. The more modes of transit, agencies, users and methods we can stitch together, the more likely is success. Whether it takes cash prizes or toll reimbursements or whatever, getting Miamians to stop driving alone as much as possible is better for us all.

We wish Citi.moov well. We’ve long believed in this low-cost way to clear roads. The Achilles’ heel will not be raising $500,000 but getting mass transit to live up to expectations. That means clean, quick, convenient, frequent and popular service.

City.moov’s app can help, but to hype a service that riders now are fleeing in droves will require a strong county hall push.

Like passengers, government has to get aboard. Making sure drivers show up and that service is reliable and frequent would be a darn good start.