Advertisement
The Newspaper for the Future of Miami
Connect with us:
Front Page » Profile » Burç Ceylan: Consul general spearheads business growth for Turkey 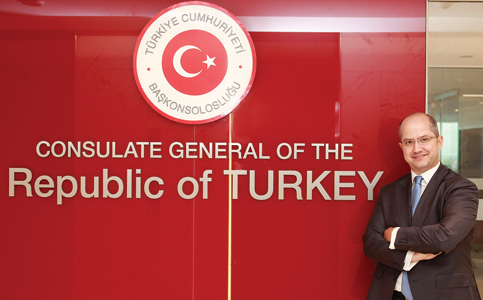 Turkish Consul General Burç Ceylan began his tenure in Miami just a month before Hurricane Irma made landfall. Despite his rocky start, Mr. Ceylan says he is acclimating well to Miami and is excited about the warm climate and welcoming, family-friendly communities.

Mr. Ceylan says he hopes to build stronger relationships between Turkey and his jurisdiction to reinvigorate the tourism industry between the regions. His area covers Florida, North Carolina, South Carolina, Georgia, Puerto Rico and the US Virgin Islands.

Two years ago, the largest cruise lines ceased operations from Turkey, drying up the primary source of tourists into the nation. PortMiami welcomed more than 4.8 million passengers last year, making it the busiest port in the world and the perfect location for Mr. Ceylan to begin his campaign to bring cruise ships back to Turkey to accomplish his goal of activating the tourism industry. ‘I am going to work on increasing the tourism sector and informing the cruise lines that Turkey is still the same country they left two years ago, and they should come back,’ he said.

While a large part of his job is helping fuel economic movement between the regions, Mr. Ceylan says being a diplomat keeps him from ever having to settle on a single career. ‘I have a different job every day,’ he said. The key to being a successful consul is twofold, he says: ‘Make sure you have good social contacts, and always follow the diplomatic proverb to know something about everything and everything about nothing.’ At the end of the day, to facilitate government-to-government communications, Mr. Ceylan says diplomats have to have strong people-to-people relationships.

Miami Today reporter Gabi Maspons interviewed Mr. Ceylan at the Turkish Consulate in Brickell over Turkish coffee and chocolates. The interview was recorded by Jahmoukie Dayle, and can be found Dec. 22 at http://bit.ly/2uNHy0Q.