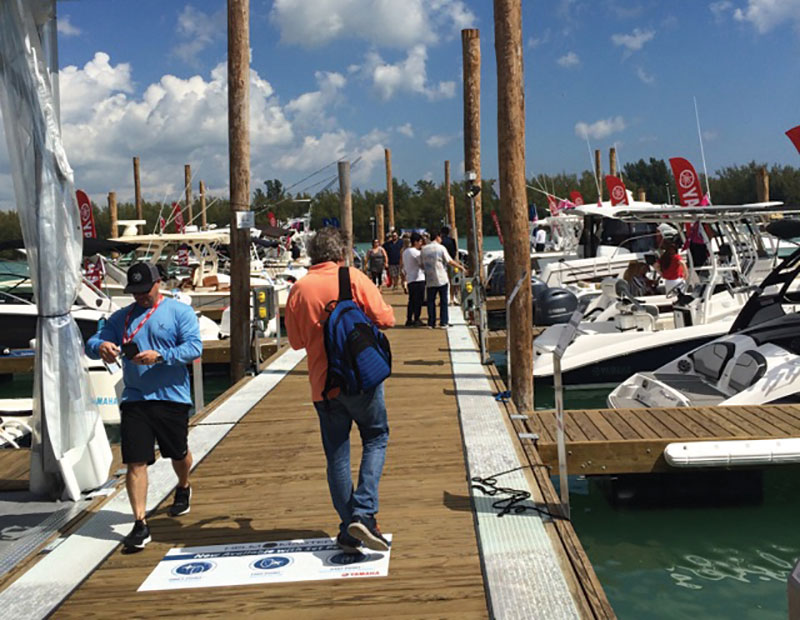 Miami-Dade’s Department of Regulatory and Economic Resources is recommending a variance and permit for an 830-slip temporary dock for the next five Miami International Boat Shows on Virginia Key with an unusual manatee protection stricture attached that could trigger an instant change in plans.
The annual show moved to Virginia Key from Miami Beach temporarily for two years while the Miami Beach Convention Center was in a renovation and expansion mode. But that work is continuing and the word “temporary” has vanished from discussion of the move itself, just the dock.
The show is one of the two major events that each year congest traffic for days to and from Key Biscayne, leading to push-back from the Village of Key Biscayne. The other is the Miami Open tennis tournament, which has a deal with the county to move out of Key Biscayne’s Crandon Park after the March 19-April 1, 2018, tournament and be based at Hard Rock Stadium in Miami Gardens to the north.
One innovation that reduced potential boat show roadway traffic the past two years was a temporary water taxi service via a cobbled-together fleet of water vehicles to the boat show site.
The permit recommendation to county commissioners says that county staff have determined that three of the four water taxi sites for the coming shows are compatible with marine facilities criteria.
But, says the memo from the department’s director and Deputy Mayor Jack Osterholt, “the applicant is also proposing to use the FEC slip located north of the AmericanAirlines Arena, a use requested and authorized for the last two boat show events.” Yet that area is recommended for large freight vessels and “is not recommended for transitory use such as water taxis service because the higher frequency” of water taxis could overlap “manatee travel patterns at this location.”
But the boat show seeks to use vital parking for AmericanAirlines Arena, so the department “considered that the boat show lasts only five days each year and that the area of Biscayne Bay adjacent to the FEC slip is designated as ‘Slow Speed All Year,’” Mr. Osterholt wrote to county commissioners in dealing with the issue of manatee protection.
Staff then decided that for five days it could live with a water taxi stop at the FEC slip so long as each taxi carry aboard “a manatee observer” and that “should an impact to the manatees occur, water taxi service to and from the FEC slip shall cease immediately and will not be authorized for subsequent events.”
That provision, as well as all other terms, was subject to a Miami-Dade County Commission vote this week.
The City of Miami owns the bulk of the barrier island where the show is held and has several lease agreements with for-profit and non-profit entities. A revocable license that city commissioners approved in January 2015 granted the National Marine Manufacturers Association the right to use the land and water surrounding defunct Miami Marine Stadium and other adjacent city-owned land to stage the show.
The license authorized the creation of access agreements along Virginia Key, subject to city commission approval, according to a staff memo from City Manager Daniel Alfonso. The association was to pay the city 50% of profits from the boat show, Mr. Alfonso wrote.
Mr. Alonso signed the county permit application to give written consent of the property owner.
The permit says the 830 slips being approved for temporary use would hold vessels ranging from 6 feet to 100 feet long.
The cost of the temporary floating docks and ramps is listed in the permit application as $750,000. The work is to be done by Dock and Marine Construction Inc., 752 NE 79th St. in Miami.
While the past permit period was two years, Mr. Osterholt wrote, that permit will expire before the coming show and another is needed. “Due to the recurring nature of the proposed project, the applicant has requested that the permit be authorized for a five-year period,” he wrote.
The permit gives the boat show a 90-day window in which to have the dock constructed and then removed from the area, with show itself lasting five days. The next show is to be held Presidents’ Day Weekend, Feb. 15-19, 2018.
The memo notes that materials made of disposable plastic or polystyrene are prohibited in the area.