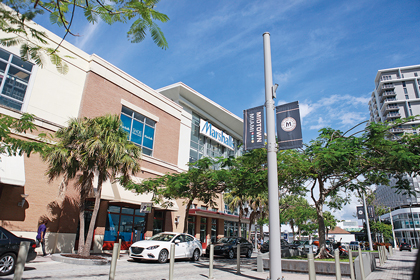 The strength of downtown’s retail market and its spiraling leasing rates have pushed merchants and restaurateurs farther north, observers say.

Though she agrees that Edgewater and areas north benefit from the popularity of the central business district, Noa Figari, vice president of retail leasing of Colliers Urban Core Division, says her heart is still downtown.

“I really think downtown’s transformation has brought unique retailers, and neighborhood bars and restaurants you can’t find in other areas,” she said. The legendary Purdy’s Lounge is rumored to be moving to downtown from South Beach, she said, and others, including Buddha-Bar, are already there.

Once the Brightline train service is running and Miami Worldcenter opens its doors, she said, “more people will visit the area and want to live here.”

“We really see a lot of artists moving from Wynwood to downtown,” Ms. Figari said. “In the next 10 to 15 years we’ll see 10 times more move in, because we have gallery space from $20 to $80 per square foot. No one has that. In Wynwood, they will not even talk to you for less than $100 per square foot. Downtown landlords will work with you, and there are more concessions than in any other submarket,” she said.

Leaving downtown, Edgewater “is a good place to go,” she said. “There is great opportunity because of the residential there,” she said. “It’s a bit more spread out, and once rates get too high, people will start searching for somewhere else.”

The corridor along Northeast Second Avenue north of downtown also offers possibilities because it is accessible to residential areas, as well as to other retail hot spots, Ms. Figari said. “Rates will eventually get too high there, too, but that won’t happen for a few years.”

“Everything is on a pause for the Flagler Street renovation to be completed,” said Rafael Romero, vice president of CREC’s retail division, which is leasing (among other properties) the historic Alfred I. Dupont building at 169 E Flagler St.

“The retail picture north of Brickell City Centre is an interesting topic, because it is so dynamic,” he said. “We see tremendous potential in downtown. That being said, the properties owned by Moishe Mana have not seen a retail renaissance. Exceptions exist, but you don’t see a lot of national credit these days.”

Retail is “certainly expanding in Edgewater, Wynwood and along Miami Avenue and Northeast Second Avenue toward Midtown,” he said. Some of that growth is driven by tourism in Wynwood, he added.

Midtown “is poised for explosive growth and has the greatest opportunity since its inception,” Mr. Romero said. “It’s a great underdog story, built on the wrong side of the tracks.”

Retail there has always been mid-market: Target, Ross and Marshall’s are examples, with West End and restaurants like Sugarcane being the exceptions.

“Midtown is wedged between unique and successful markets,” he said. “Better things have opened all around it,” in Wynwood to the south, the Design District to the north, and Edgewater to the east.

“Wynwood and Edgewater picked up on the weakening of the Midtown area,” he said. “There are reasons [the developer] focused on the casual, but we know where the growth is, and it’s not the ultra-cheap market.”

Edgewater may be the salvation of Midtown, Mr. Romero said. “There are some exceptions, such as Wynwood, but in general, retail follows rooftops. With all the new construction in Edgewater, it’s going to attract a demographic with lots of disposable income. It’s the coolest retiring generation so far! They’re social; they go to restaurants. In the future, it will be the locals that will bring business to the restaurants, not the tourists.”