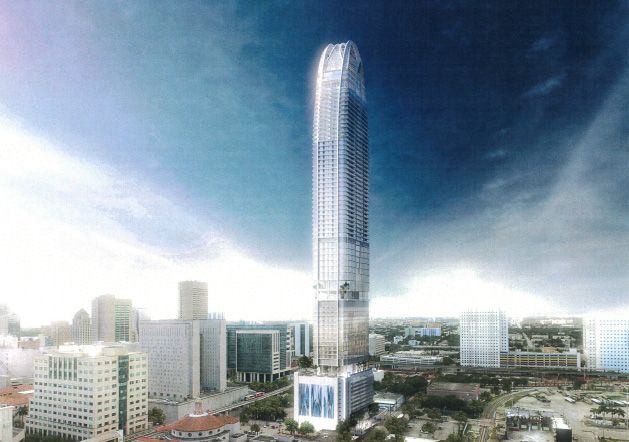 A surface parking lot in the heart of downtown Miami is destined for new heights – Turkish developers plan a 73-story tower to be called The Sterling.

The nearly 966-foot tower is to be home to a 300-room hotel, 363 dwellings, commercial-retail and office space.

The architectural team says the design, with its sloping and curved top, was inspired by the shape of a tulip, the national flower of Turkey.

The city’s Urban Development Review Board on Oct. 6 recommended approval of the tower, with conditions.

“This is the first of its kind. It’s an incredible project,” she told the board.

Ms. Leiva said The Sterling will be a retail, hotel, office and residential tower with “a sky high 68th floor restaurant.”

There will also be parking for about 500 vehicles, according to documents given to the city.

Ms. Leiva said it represents a major urban infill project, rising in an area near Miami Worldcenter, Miami Dade College, county and federal courthouses, and the new MiamiCentral transportation station with its promise of passenger rail from Brightline.

The site at 501 N Miami Ave. is between the College North and Wilkie D. Ferguson Jr. Metromover stations, and adjacent to Christ Fellowship church.

The developers are requesting several waivers, including permission for parking in the second layer and above, reduced setbacks, less distance between driveways and more.

Architect Robert Behar, review board chairman, recused himself from the discussion and took a seat in the audience, as his company is designing the building.

Architect Eduardo “Edie” Vera, with Coral Gables based Behar Font & Partners P.A., told the board the hotel is a five-star hotel with meeting rooms, not far from the city’s new museums and other major new developments like MiamiCentral.

Mr. Vera said many major cities are defined by their skyline and The Sterling, with a state-of-the-art design offering the architectural expression of a tulip, helps Miami have an outstanding skyline.

Levels 24 and 25 will have swimming pools, a fitness center and panoramic views, he said.

The 68th floor will house a restaurant and be open to the public, Mr. Vera said. The layout consolidates the kitchen functions to the west, opening up the northeast and south sides of the restaurant to great city views, he said.

The high-end condo units will have private amenity decks. The top floor, with its large arch, is to have an exclusive pool deck.

Board member Neil Hall called it a “stellar project” and a very beautiful building. “It has set a high bar,” he said.

Conditions from the board included the developer enhancing Americans with Disabilities Act access, the city planning department reviewing the landscape plan for compliance with the street tree code, and use of more durable materials for murals on pedestal walls.