Advertisement
The Newspaper for the Future of Miami
Connect with us:
Front Page » Government » City of Miami budget tops $1 billion, adds 60 jobs 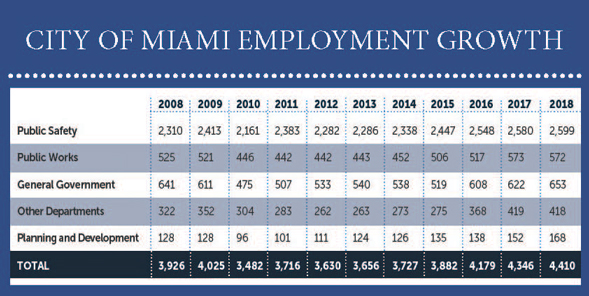 The proposed budget for the coming fiscal year in the City of Miami is a symbol of financial stability and prosperity, as it tops out above $1 billion and includes creation of more than 60 new jobs to handle new and expanded services.

Mayor Tomás Regalado and City Manager Daniel Alfonso presented the proposed fiscal year 2017-18 budget to city commissioners earlier this summer, and hearings on the budget are set for Sept. 14 and 28, each at 5:05 p.m. at City Hall.

The four funds of the operating budget include:

Mr. Regalado and Mr. Alfonso, along with Office of Management and Budget Director Christopher Rose, are touting the fact the new budget will see another consecutive year with a reduced millage rate, part of the formula used to calculate property taxes.

“The first significant feature of this budget is that the total Property Tax Millage Rate is proposed to be lowered from 8.29 mills in FY 2016-17 to 8.03 mills in FY 2017-18,” wrote Mr. Alfonso in his cover letter to the budget.

“If the City Commission adopts the property tax millage rate as proposed in this budget, residents and businesses would benefit from the seventh year in a row of lowering the overall property tax rate (from 8.6441 mills in FY 2009-10 to 8.0300 mills in FY 2017-18),” he said.

The average homesteaded home in the city has a taxable value of $209,998 and would save $55 compared to the same taxable value in the previous fiscal year.

With this new budget, the city expects to realize nearly $22.4 million of additional property tax receipts. The city manager said this increase in revenues is proposed to fund the following expenditure increases:

$6.714 million of increases in salary and wages across all general fund employees.

In his cover letter, Mayor Regalado acknowledged this is his last budget proposal. Term limits mean he can’t run for re-election.

“As I near the end of my time as mayor, and by extension my time as a public servant, I think not of what has happened, but what will happen,” he wrote. “The city is in a strong position to make the most of the future ahead of us. I am proud that my consistent priorities of investing in activities and services that impact the quality of life of our residents and businesses, while keeping taxes low, have been implemented by the city manager and his team so well for so many years.

“A legacy is not built on one budget, one year, or one decision; but on the myriad of choices, statements, and actions that we each make. The future, both near and long term, is not guaranteed,” Mr. Regalado said.

He said there is always work to do and aspects of city services that need improvement.

“In this budget, we are addressing some persistent needs. In particular, we are creating the Department of Veterans Affairs and Homeless Services to assist those that need the most help and deserve our attention. Also, we are elevating the zoning functions to become a separate department. Lastly, we are utilizing some of the city’s fund balance to invest in much-needed capital, especially in the departments of Information Technology, Parks and Recreation, Police, and Fire-Rescue. Our fine employees cannot do their jobs adequately if they don’t have the equipment, systems, or facilities available and functioning,” wrote the mayor.

A graphic provided within a budget overview shows the number of employees in each department and reflects added positions. For example, the police department is expected to add 18 jobs for a total of 1,752. Code Compliance is to add five employees for a total of 59. Information Technology expects to add 16 new jobs, for a total of 93. And the city’s brand new Office of Resilience and Sustainability plans to add two positions for a total of five.

There is a total net gain of 64 positions, which represents a net personnel growth of 1.5% across all departments.

Another significant feature of the proposed budget is the use of prior year fund balance to fund $17.388 million of capital projects, according to Mr. Alfonso.

It is a structurally balanced budget with this one-time revenue being used only for one-time capital expenses, he said.

Notable projects funded in this manner include:

Repairs at the James L. Knight Center, $1 million, and at the associated parking garage, $1.25 million.

An investment of $2.8 million in firefighting apparatus, including replacement of four fire-rescue trucks.

Repairs and improvements at the Little Haiti Cultural Complex, $1.85 million.

Under the proposed millage rate, every tenth mill will generate approximately $4.3 million for the city’s general fund in the next fiscal year.

Even with the slight drop in the millage rate, many property owners can expect to pay a bit more in overall taxes in 2018 due to an increase in assessed value at the county level. According to the Miami-Dade County property appraiser, this year the city had an overall property value increase of 11.3%, including new construction.

The proposed operating and capital budgets are available online at the city’s website at www.miamigov.com/budget.