Advertisement
The Newspaper for the Future of Miami
Connect with us:
Front Page » Real Estate » 92-story downtown tower OK’d for Miami’s skyline 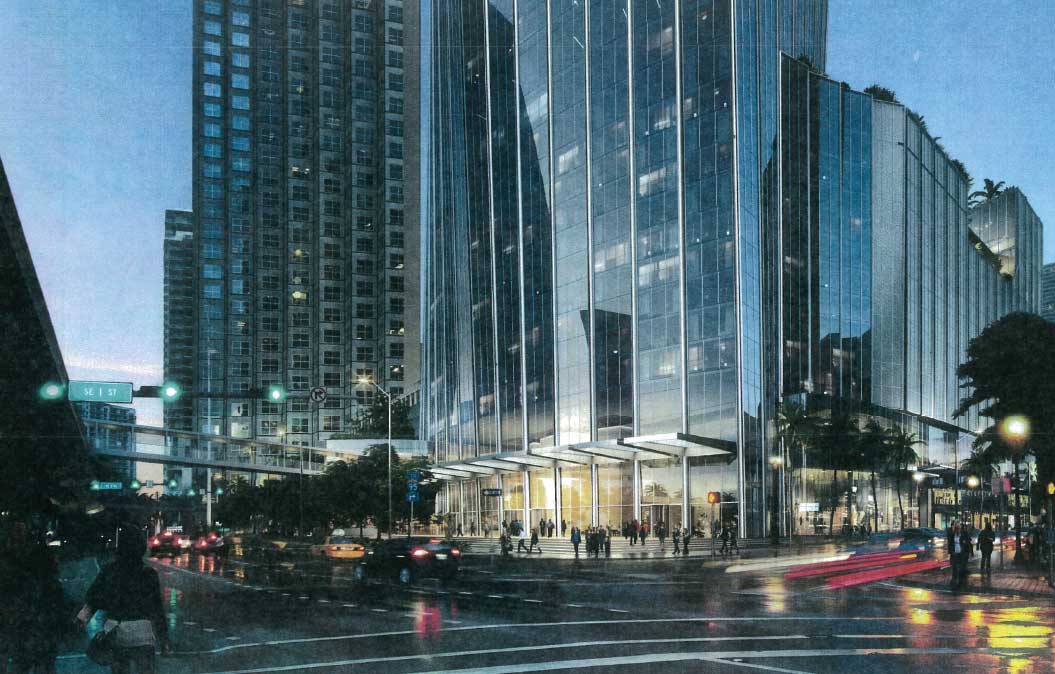 A sleek glass tower packed with amenities and mixed uses is ready to make a lasting impression on Miami’s skyline. In doing so, One Bayfront Plaza would capture the prize as the tallest building in Florida, 1,049 feet.
The city’s Urban Development Review Board recommended approval July 19 of a revised plan for the high-profile site in the heart of downtown.
Board members were taken by its style.
“It’s the most beautiful building I’ve seen presented to this board,” said member Fidel Perez. “Congratulations. When it’s built, it will bring Miami to a different level. Job well done.”
Acting Board Chairman Dean Lewis called the project “very sculptural.”
One Bayfront Plaza is to rise 92 stories with 1,361 residences, 100 hotel rooms, 534,379 square feet of offices, 101,650 square feet of retail, 27,500 square feet of exhibition/banquet area, and 8,000 square feet of observation deck/retail.
An abutting garage for up to 2,117 cars is also planned, along with three swimming pools, a pedestrian passage, and the hope of an elevated walkway linked to Metromover’s Bayfront Park Station.
The 2.5 acres at 100 S Biscayne Blvd. take up the entire block between Southeast First and Second streets and Southeast Third Avenue on its western edge.
Board members asked when developer Florida East Coast Realty hopes to start building.
Jerome Hollo, executive vice president, said it will probably be early 2019 before all needed permits are lined up and, after that, construction is expected to take 48 to 52 months.
Mr. Hollo said the company is open to start earlier. “If we can push it, we’d love to push it.”
Work by project architect William C. Louie of Kohn Pedersen Fox Associates includes the mixed-use former Espirito Santo Plaza, completed in 2004. The 1.2 million-square-foot, 35-story tower is home to the Conrad Miami Hotel, luxury residences, and was headquarters of now-defunct Espirito Santo Bank.
In a letter to the city, attorney Vicky Leiva, representing the developer, detailed the history of the downtown site.
The city issued a major use special permit for One Bayfront Plaza in 2007 under prior zoning. At that time, the project consisted of two large towers with additional floor area.
“The applicant now seeks to modify the previously approved project to provide an enhanced design in closer compliance with Miami 21 [zoning] that will reduce the overall floor lot ratio of the project, create enhanced view corridors, a more activated pedestrian realm, direct and more ample access to Biscayne Boulevard, more open spaces, and other elements consistent with the purpose and intent of Miami 21,” Ms. Leiva wrote.
The enhanced design starts by significantly reducing the podium’s height and replacing it with a lower two-tiered podium. The lowered podium is partially accommodated by adding basement parking.
While retail originally fronted First and Second streets and Biscayne Boulevard, the new proposal adds Third Avenue retail frontage.
The modification also creates a pedestrian passage, aligned with Biscayne Boulevard, through the project from First to Second street, Ms. Leiva said.
“It’s a great development,” Mr. Lewis said. “I look forward to seeing it built.”